This week's hike was at Sweetwater Creek State Park.  Although 45 miles away (in Atlanta traffic - ugh!), it was definitely worth it!

One of the first things that got my attention on the trail:


Awareness is a good thing.  Although no snakes were encountered, it absolutely was in my mind for the duration of the hike.  They would not have posted this sign for no reason.


Note to self, leave earlier.

The hiking group, with typically 30+ people on any given hike, including first-timers, has a strict policy regarding starting the hike on time.  I do like and appreciate this policy.  There is a few minute grace period, but out of respect for those who arrived on time, the hike begins regardless.  We arrived ~10 minutes before the hike started.  However, I needed to buy an annual state park pass (my National Parks Pass does not apply to state parks).  That process took longer than anticipated so we ended up starting the hike on our own and try to catch up to the group.  It also did not help that I started on the red blaze trail and they were on the white blaze.  :)  We were about 20 minutes behind once we got onto the white blaze trail.  Hence the title "Group Hike, Kinda Sorta".

Okay, I really do not have tracking skills.  But I can surely see how one could develop them.  It was not difficult to stay on the trail because the blazes confirm you are still on the right path.  Even though, it is always comforting when you are in the woods, with crisscrossing paths with the possibility of making a wrong turn, and then you see the blaze (white for this hike).  Let's you know you're not lost.

Seeing evidence, primarily fresh shoeprints in the soft dirt, let us know that hikers had recently been here with the assumption - it was the group we were trying to catch up with.  But more interesting to me, I could see where they stopped for breaks.  Some of the hikers use walking sticks or poles.  The poles typically have somewhat of a point on the bottom.  So when a person with poles was standing still, they ended up picking their pole(s) up and then putting it back down in the ground leaving a series of holes in the dirt.  It was interesting seeing this, had never really thought about it before.  I could deduce that a large group (many different groupings of holes in the ground) had recently been there.


Caught up to the group, finally.

About an hour and a half into a two hour hike, we caught up to the group! 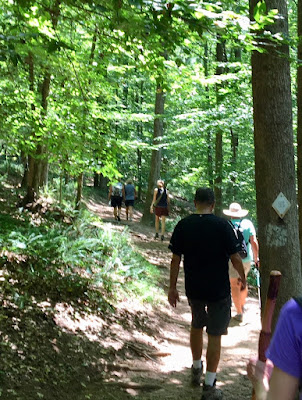 One of the highlights on this hike - the ruins of the mill operated by the New Manchester Manufacturing Company.  Built in 1849 the mill used the rushing waters of Sweetwater Creek to power a cotton mill.  The mill was destroyed in 1864 during the Civil War.

Standing there, looking at the ruins, could not help but wonder what it would have been like 170 years ago.  People coming, people going, busy at the mill.


Lunch after the hike.

Another fun part of these hikes, lunch afterwards.  Sometimes at a restaurant, pizza place, BBQ joint, and once and a while, when there are facilities available, a picnic lunch.  This day we had a picnic lunch.