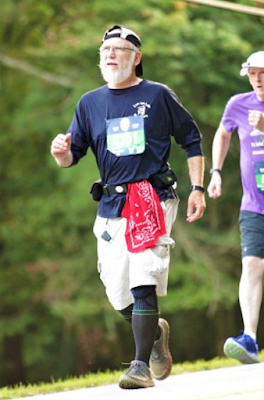 Back in 2011 I set a goal to walk 10,000 miles and complete 100 races (mainly walking with a bit of running thrown in, usually downhill). It was just something to do. I don’t fish, I don’t golf, I walk. Plus, it also helped with waistline, and cholesterol/triglyceride levels. After completing a few races, I found I needed to have a longer-range goal. Something to keep me going, something to keep me motivated. Hence the goal.

In July (2022) completed my 105th race, a 3.1-mile trail race on Sawnee Mountain in Georgia. Yes, I know that’s more than 100 – I signed up for an eight-race series of trail races. I got a discount for signing up for the series.

Most of the races were in Georgia but I also got to do events in: Florida, North Carolina, South Carolina, Alabama, New York, New Jersey, New Hampshire, Utah, and California.

A highlight for me, in 23 of the races, I got to do them with family members. I was able to do races with all three of my kids, daughter-in-law, brother-in-law, and two of my grandkids. They have no idea how special that was for me.

At best, and I really mean at best, my lifelong athletic abilities would probably be considered average… at best. But as I got older a funny thing started happening. Fewer and fewer guys in my age category would show up to do these races. All a sudden, I started getting podium (1st, 2nd, or 3rd place) finishes for my age bracket. That was something that never happened before. I figured it’s always better to go out when you’re on top.  For each of the races in the eight-race series I just completed, in the male 65-69 category, I had podium finishes.

This was fun, glad I did it. 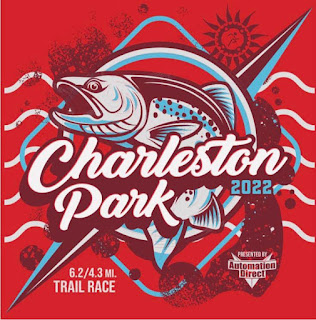 I didn't plan it this way. It just happened. Typically, the days before a race are a taper. You reduce the activities that you might normally be doing. The theory is, you will have more energy for the event. Well, that's the theory. The two days prior to this race I was in the north Georgia mountains, hiking.

My daughter was in town, we decided to hike to the Hike Inn. The Hike Inn had been on my list of things I wanted to do for a few years. These two days were the only ones that fit everyone's schedule. It's a 5-mile hike from Amicalola State Park to the Inn. At the Inn you get a rustic bunk for the night, and they feed you dinner and breakfast, family style. We thoroughly enjoyed doing this. So, instead of tapering before the race, I ended up doing about 10-miles, hiking.

Saturday morning, I was up and on the road about 5:30 AM. It was about a 30-minute drive. Of course, had the usual, a coffee and an apple fritter on the way.

The race was capped at 250 participants. The reason for this, parking. There are only so many parking places at the park. It's a nice park. Prior to this race, I didn't even know this park existed. It's on the shores of Lake Lanier. It's a great place for a hike someday in the future. Glad I learned about this place.

Being early I was easily able to make my way through the porta-potties, twice. That's always a good thing before a race. They had us line up in groups according to expected speed. I lined up in the 12-minute-mile or slower group. It was the last group. I am a back-of-the-pack guy, so this was my normal place.

It was a wonderful trail. There were enough rocks and roots to require me to look down more than looking ahead. That is the challenge of trail races. Steps must be figured out to prevent yourself from tripping. In road races, you can look ahead. This is not true in trail races. Face plants are always a risk if you do not make deliberate decisions on where to plant your foot.

It was a good race. We did a lot of switchbacks, you always had others in your peripheral view. It was a 4.3-mile race. I overdressed for this race, had too many layers on. After the race, soaking wet from sweat, headed to my car get into some dry clothes. Your body temperature drops rapidly once you stop, I get cold pretty quick when this happens.  Dry layers really do help with this rapid decrease in body temperature. As I made my way back to the finish line, they were announcing the 3rd, 2nd, 1st in the male 65-69 category. I place 1st. I was surprised. My time was 58:21, a 13:34 per mile pace. 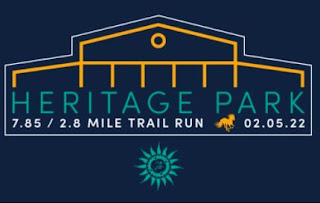 At 5:50 AM, when I got in the car to drive to Watkinsville the thermometer displayed 27 degrees. Yes, I did question why I was doing this. At some point I thought this would be a good idea. A few miles away, stopped at a QuikTrip for a coffee and an apple fritter. I tend to justify filling my stomach with simple carbs and sugar before the race. The logic, they'll be ready to be consumed quickly in the race in a few hours.

The trail was a bout 55 miles away. There weren't too many cars on the roads yet, even fewer on the two-lane roads once I got closer to Watkinsville. Arrived at Heritage Park, a horse park, and was pleased to find ample parking. That is typically not the case on most of these trail races. The first thing I noticed when I stepped out of the car, the ground was crunching with every step I took. It had just rained for a few days and with the below freezing temperatures, there was a thin layer of ice.

First things first, coffee and a long ride, needed to find a bathroom. What was nice, it was inside, and it was heated. Next looked for the packet pickup area, got my shirt and bib and started walking back to the car. I saw it and it made no sense whatsoever. 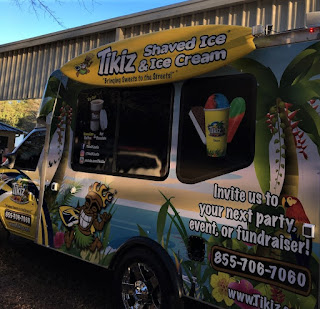 Tikiz Shaved Ice & Ice Cream! What? It's 27 degrees outside. But then it made sense, they also sell Hawaiian coffee and hot chocolate. People were lined up on the other side in line for coffee.

About 30 minutes out from race time, started my warmup. With this old body, old bones, really can't just go from the car to the start without getting things warmed up. As I made my way around noticed something and thought, I need to get a picture of this. 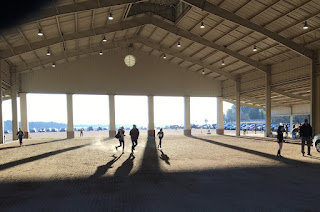 Looking east, as the sun was rising, I liked the shadows in the horse arena. With the sunup the temperature was probably in the low 30s. Still cold but you could feel the warmth of the sun.

I found my starting corral, as usual, the last one. It makes sense for us to line up behind the faster people. There's no sense, if you're slow, to get in everyone's way up front. The race director, through a bullhorn was going over details of the trail. The one thing that stood out, we had to cross a brook just after the two-mile mark. With the rain in the previous days, it was about five feet wide. Bottom line, at least one of your feet is going to get wet. There was no other way around it. Oh well, too late to back out now.

There were a lot of rocks, roots, hills, and switchbacks on the trail. I warmed up pretty quick. With the switchbacks I could see glimpses of what was ahead. As explained, just after two miles, I saw the people ahead of me at the brook. Although not happy about this at all, figured the best way through would be to not even break stride and get through it. When I got closer the woman in front of me, maybe 20-30 feet, just stopped at the brook. As I approached, she started explaining to me that she was just trying the figure the best way through it. As planned, I didn't break stride. Went to the left of her and plopped my right foot in the middle of the brook. The water was about four inches deep. The only saving grace, I did have an old pair of sneakers and a pair of socks in the car. Glad I had those.

Once again, place 2nd in the male 65-69 age category. There were only two of us in that category.