Up early and on the road at 4:15 AM. It was a long ride to Unicoi State Park in the North Georgia Mountains. The fog was thick. It was the kind where people say you could cut it with a knife. With a stop for coffee, it was a two-hour trip. Parked in a wet, muddy field and made my way to the check-in table. It was still dark, regretted not bringing my headlamp. Note to self - always have a spare headlamp in the car.
Bears! Okay, we're in the woods in the North Georgia mountains. Of course, it's bear country. Somehow, I just tend to forget about that though. Good to be reminded. 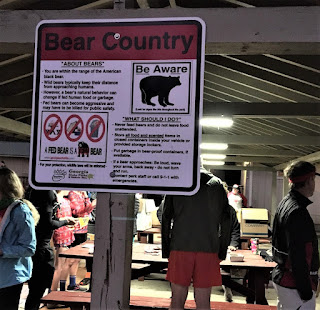 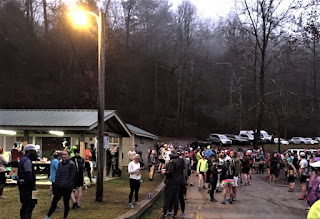 It was a 10K and a half marathon. After the race director gave the pre-race instructions, I was thankful I didn't sign up for the half. The half included a thousand-foot elevation gain. And as hard as that would have been, probably would've been more dangerous on the way back down. The course was very wet from the previous day's rain. Glad I signed up for the 10K.
We were off. It was very crowded at first. At about a mile or so, people (fast vs. slow) had found their place in the race. Not crowded at all after that. I switched between walking and running, mainly running on flat areas.
This was the first race since getting a new Fitbit watch, a Charge 5. It worked great. It notifies me with vibrations as my heartrate increases/decreases. I am very heartrate focused when I do these races. When it gets too high, I immediately slow down.
Finished with a time of 1:25:23. The best part though, it didn't rain!
at December 13, 2021 No comments:
Email ThisBlogThis!Share to TwitterShare to FacebookShare to Pinterest
Labels: Trail 10K, Unicoi State Park

As a volunteer gig I get to be a gallery interpreter in an aquarium. We recently got a new octopus, Rita. 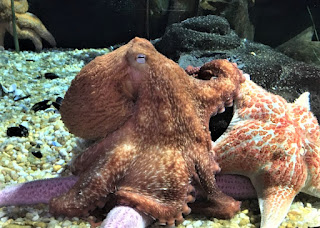 She's almost a year old. For the first few weeks she hid most of the time. When guests asked where the octopus was, had to point to where she was hiding. The trainers told me her hiding places. This week was different though. Rita must be getting more comfortable with her new home - she was out and about for my entire shift. 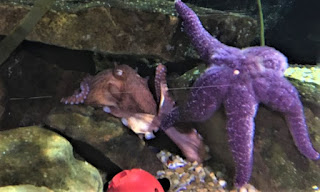 She's even socializing a bit with some of the sea stars. Not really sure who was checking out who though. What's interesting, and this happens pretty consistently, when I tell guests that her name is Rita, if one of them is from the generation I'm from, inevitably they say, "Lovely Rita, Meter Maid."