"There are only two seasons - winter and Baseball" - Bill Veeck

It's odd, but the older I get, the more that I fall into that two season theory.  For me, during the season, even if I am not actively watching a game, it's always on in the background either on TV or the radio.  It's comforting and I suspect it draws me back to many nice memories from growing up.

It's hard to believe it was 45 years ago this month when my grandfather took me to Shea Stadium to see my first MLB game - NY Mets vs. Montreal Expos.  Little did we know that that year would be the year of the 1969 Miracle Mets.  You see, Grandpa was a Mets fan therefore I was a Mets fan - no questions asked, good enough for Grandpa, good enough for me.

I still recall the distinctive voices of the Met's announcers - Ralph Kiner, Lindsey Nelson - TV, radio, if it was summer time, their voices were coming through.  Great memories.  Awhile back I came across the 1969 NY Mets schedule and recently took a good look at it. 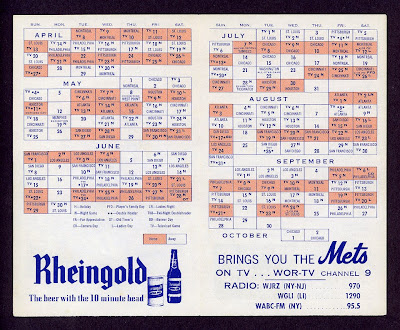 Quite a difference compared to baseball today:

- About half of the games, were day games!  Over 70 day games in the season.

- 4 exhibition games during the season!

The game is still pretty much the same, 9 innings, 9 players on the field, 3 outs, 3 strikes, 4 balls, but a lot of the parameters have changed.  I'm still a fan and suspect I always will be, but I do miss the way the game used to be.