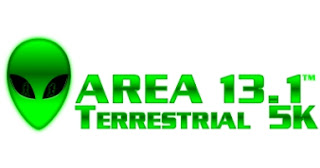 It's been a long time since the last time I did race. Two and a half years to be exact. Retirement from work, Covid, and such. Anyway, glad to be back at it. I joined just over 1,000 people who also signed up to do the half-marathon or 5K. It was a nighttime race, my first. They strongly recommended bringing a headlamp.

There was one other really odd thing about this race for me. After looking at the race participant list on their website I noticed that there were only two guys in the male 65-69 category. With the assumption that the other guy was going to run the race, all I had to was keep my walking pace fast enough to meet their cutoff times (6.5 miles by 9:00 PM (2 hours) and 10 miles by 10:00 PM (3 hours)). If I was successful, I'd place second in the category. This became my goal for the race. I don't typically place 1st, 2nd, or 3rd in any of the races I do, especially half marathons.

As race time was getting near, I took my normal starting position near the back. During the national anthem, took my hat off and stood at attention. It means so much more to me to pay deep respect not only in general but specifically because this was the 20th anniversary of the 9-11 attacks.  Shortly after that, we were off. 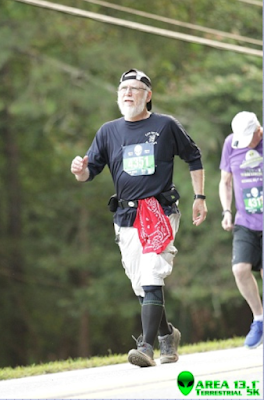 Being overly aware of the cutoff times, I decided to do a little running in the first few miles. I had "fresh" legs, no knee pain. The back of the pack thinned out pretty quickly and for the majority of the race it was never crowded. Sunset was about 7:45 so darkness came quickly. At about 8:30, while on a trail in the woods, with no one else around I was extremely thankful I had a headlamp. I shut it off once just to see what it was like without light. It would have been impossible to do this section without light. A few times I thought I was lost. Didn't see anyone ahead or behind. It was a good feeling every time I came across a sign with an arrow on it (and the race logo).

As the race progressed, I was really feeling the difference from doing my 12-13 mile walks during the week. Those weekly walks were easy. This was hard, races are different. I was able to make the cutoff times at mile 6.5 and 10. That was good. I would have been disappointed if I got a DNF (did not finish) on this race.

Three hours and seven minutes after starting, I crossed the finish line. I was exhausted. My 3:07:07 time got me 1st place in the M65-69 age group. I was the only person in that category!  :)  It was still nice coming in first though. They gave me Alien 13.1 pint glass and a $15 gift card to the Big Peach Running Store.

It was a good race.