Today's race was a 5K (3.1 miles), the Duluth Fall Festival 5K.  This was the 6th time doing this race for me, four times as a runner years ago and twice now as more of a walker/jogger.  However, this race will be the one I remember the most as it was my grandson's first race!

This race was a family affair with a bunch of us doing it.


I think about 500-600 people signed up for the race.  With the festival going on it was a nice atmosphere.  It was nice seeing folks who I have not seen in awhile - just a nice, fun time!  And of course having family there at the same time just really added to it.

They grouped us together behind the start line and at 8:00 we were off.  This was a road race and traffic control was handled by the local police department and they did a great job.  The first mile or so was downhill.  But unfortunately, that meant the end of the race was going to be uphill.  Dan and Raney took off ahead of us and I watched the back of Daniel's head (Atlanta Braves hat on backwards) disappear into the crowd.  For the first mile or so, I was with Jen and JB.  A few hundred yards beyond the first mile I told Jen that I was going to run ahead and get set up to take a few pictures of them as the went by. 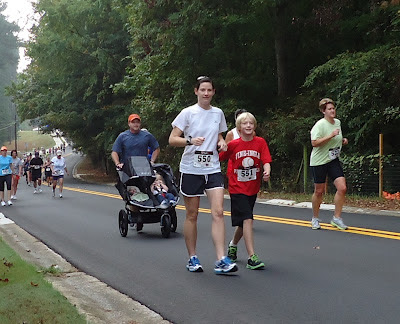 So there I was, on sidewalk, squatting down to take this pic, and all of a sudden I get this huge pain in butt - BEES!!!  Now this is not the first time this has happened, a few months back during the  Rope Mill Trail Race I was stung multiple times.  This time I was stung four times.  I am beginning to think it is me.  As I sit here and write this, these suckers hurt.  However, super thankful I am not allergic.

Anyway, moving on  in the race, once again I went ahead to get a few more pics.  However, I refused to go on the sidewalk at this point!  So a different angle for this pic: 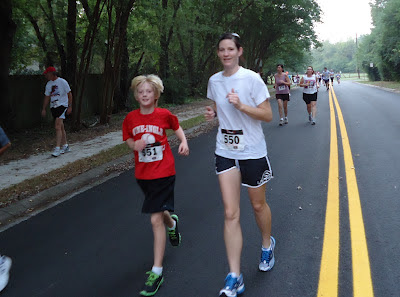 And as expected, mile three was pretty much all uphill :(  All of us finished the race and had a good time doing it, well except for me and the bee stings...

Afterwards, waters, bananas, apples, cookies,...  a nice post race spread.  We hung out awhile as they announced the age bracket winners and such.  Again, with the festival going on, it was just a nice atmosphere!  We did manage to get a few more pics (of course) with various poses - this one below was the best silly pose:


I am a lucky Grandpa!

at September 30, 2012 No comments:
Email ThisBlogThis!Share to TwitterShare to FacebookShare to Pinterest
Labels: bee sting, Duluth

Race 24 Race for the Fallen Half Marathon

Now I do not know if this is cause/effect, luck, both, neither, but for the first in the two years since I started  walking/jogging/hiking, I have not had a cold  - until last weekend.  It was one of the those with flu like symptoms - it couched me for a few days and I did not get out and exercise for three days.  Again, it's been two years since the last one!  Lucky I guess...  Anyway, through the week I was back and forth on doing this  race (that I had already signed up for) or not.  I decided to do it.

This morning I did the Race for the Fallen Half Marathon at Red Top Mountain.  It is a trail race that benefits the Police Benevolent Foundation.

So I was up pretty early for the 50 mile trip to Red Top Mountain State Park.  Luckily traffic at 5:30 AM Saturday in the Atlanta area is not too bad.  It is a huge park and it is way off the beaten path.  I actually enjoyed the peacefulness of the park after checking in, it was still dark and for the most part all I heard was crickets.  It was nice.

It was a small race, probably less than 200 people so all the logistics were pretty simple and easy.  We all gathered as the sun was rising over the trees and we were off! 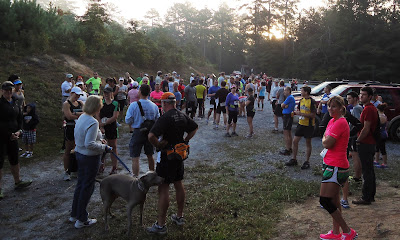 This was a trail race.  We had all kinds of surfaces: started on the road for a mile or so and once in the woods, dirt, roots, gravel, and hills.  There were plenty of hills to make this a challenging course.  For the most part, woods are woods.  And within a certain geographic  area in the country, they all look pretty much the same when you are in them. 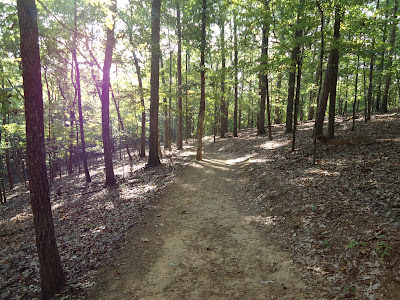 As the race progressed, I could tell more and more that I was still not 100% since getting the cold.  It was just harder.  They had 5-6 aid stations with water gatorade, orange slices, and bananas.  A few of them were out of gatorade by the time I go to them but that is pretty typical for smaller races especially for back of the pack folks.

I did a little research about the the name of this park "Red Top Mountain", the "red" comes from the iron ore content.  At one point during the race, we were going around a lake and I noticed the "red" across the lake - I guess that is what they meant? 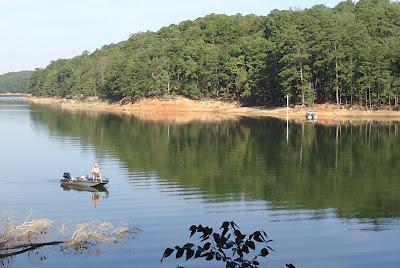 Also, I did come across a very unique tree.  I have never seen this on a tree before so I thought it was worth a picture. 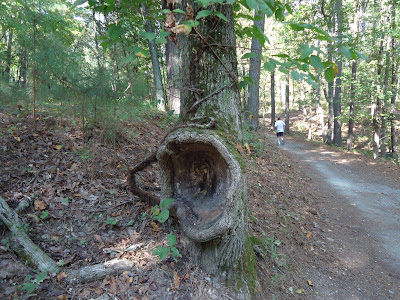 The only odd thing that happened during this race was the mile markers they had out on the course.  I recalled at mile 1 and mile 2, my Garmin was spot on.  I don't think I checked every mile after that but at mile marker 6, my Garmin had 6.75 miles.  Hmmm...  And then at mile marker 7, Garmin had 7.8 miles.  This actually plays mind games on you when this happens on the course.  Which is right?  Is my Garmin broken?  Then, somebody had a whoops when laying the course and mile marker 10 was before mile marker 9 (they swapped them).  By that point I had no clue what was what.  However, in the end, when I crossed the finish line, my Garmin read right around 13 miles :)  I guess the lesson here is to not trust mile markers!

at September 15, 2012 5 comments:
Email ThisBlogThis!Share to TwitterShare to FacebookShare to Pinterest
Labels: back of the pack, trail

For my walk today I decided to just walk around downtown Duluth.  It's been awhile since I walked around down there so this was an opportunity to see what was new.  The first thing I noticed in Duluth Town Green was an obelisk referencing the Eastern Continental Divide.  Hmm... knew the divide existed, did not realize it existed here though.

Moving on I noticed the Park Cafe & Wine Market.  This cafe is in the historic Knox House (1899).


As I made my way down the Town Green I saw the City Hall structure with the clock tower.  This never fails to remind of the clock tower in the movie "Back to the Future"  :) 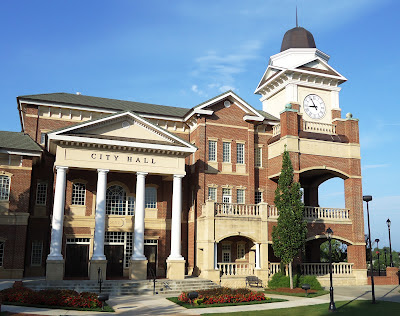 Moving off the Green and on to the streets, I notice Downtown Duluth is expanding with various businesses. This is a good thing!  Some of the businesses downtown:

I was glad I took the time to walk around downtown to see what was there.  As I walked away from downtown I noticed the sign for the Duluth Fall Festival in a few weeks, I think it's the 30th annual! 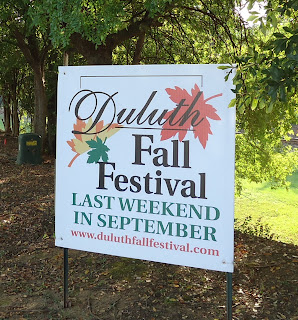 They have a 5k during the festival, think I'll sign up for it.