Race 15 Thrill in the Hills Half Marathon


After a lot of back and forth on should I do the full marathon (26.2 miles) or do the half marathon (13.1 miles), I finally decided to do the half at Fort Yargo State Park today.  The race is known as "Thrill in the Hills" and it is put on by a company called Dirty Spokes.  Side note - if you ever happen to have the opportunity to participate in a race put on by these guys - do it!  They are great at doing these races.


Anyway, I had originally signed up for the full.  But about a month ago, I noticed that they were doing a split start.  The full marathon was to start at 8:00 AM and the half at 8:30.  So as I am a back of the pack person (meaning slow), that meant if I did the full, I would be passed on the trail by many of the half marathoners.  I calculated that I would be passed by more than 300 runners during miles 4 through 7.  And this would have been mostly on a single path in the woods!


The morning of the race I was up early, 4:30ish, eating my race morning PBJ sandwich and coffee.  Checked the weather one more time, figured out what to wear, dressed and headed out the door.  Fort Yargo is only about a 30 minute drive.  Arrived there as the sun was rising. 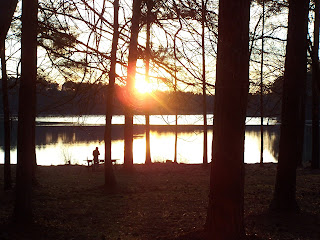 Enjoyed the serenity of the sunrise for a bit and then headed over to picnic shelter #5 for race packet pickup. 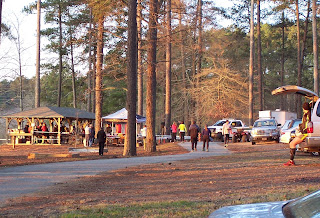 What a great day for a race in the woods!  It was a bit chilly at 38 degrees, but once you get moving on the course, it's pretty nice!    Folks started gathering for the start and shortly after that we were on our way.

After a half mile or so on the road (for thinning out) we hit the trail in the woods.  My guess, there were about 400 doing the half marathon.  By the time I got to the woods we were single file queued but it didn't take too long to get going on the trail.

Given a choice of road race or trail race - for me, trail race!  It's just so great being out in the woods.


By about mile 2, spacing was pretty good.  From that point on, it was never crowded.  And actually at times I could not see anyone in front or behind me.


Once again, 13.1 miles in the woods - there is potential to get off course (lost).  The race director had a link on their website for turn-by-turn directions for the entire course so I printed it out and put a copy in with my race day gear.  You know, this only helps if you actually bring the directions on the course - which I did not!  :)  This was not a big deal though, they had enough yellow squares marked on trees on the trail.  So there were only a few short periods of time when I thought I might be off trail - but I never was.

A few people passed me early on in the race and a few was no big deal.  But as I went on through miles 4, 5, 6, and 7, I was pleased with my decision to switch to the half.  It would have been crazy having 300 or so people pass me during that time.  :) 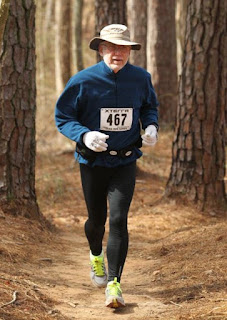 Post race they had pizza, bananas, gatorade, and water.  The pizza was great! 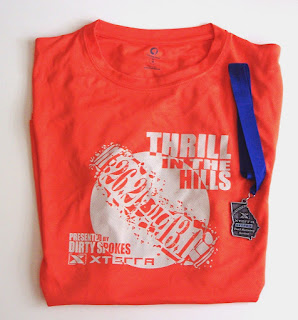 After the race, on the way out I stopped and took these pictures. 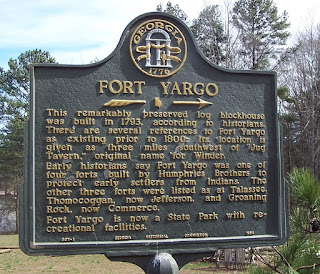 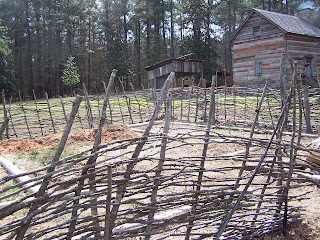 Also, as a tie in to retirement, met some folks there who are from New York (retired) and stay at Fort Yargo (and work there for free rent) each winter.  This is another line of thought that will be fun thinking about during long walks. 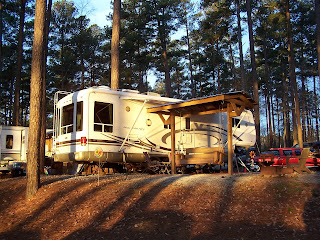 at February 25, 2012
Email ThisBlogThis!Share to TwitterShare to FacebookShare to Pinterest
Labels: back of the pack, half marathon, trail