Months ago my daughter said she wanted to run her first half marathon and picked this race as her first half.  That was all the motivation I needed to sign up for it.  :)  We were up early - coffee, bagel, banana and we were ready to go.  We decided to take Marta (the subway system in the Atlanta Metro area) down to the race instead of driving downtown. 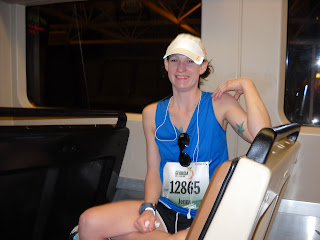 The weather was unseasonably warm so dressing for this race was more like summer time,  Heck, just 2-3 weeks prior, she visited and we went out for a longer distance with tights, gloves, hats,...  So this was quite different.  Of course the only other people we saw on the Marta train were all doing the race.  This was good as far as not getting lost!  The train pulled into the Peachtree Center station and we walked downtown a bit and made to the race with plenty of time to spare and virtually no waiting for the porta-potties.

This was a pretty big race with 10,000+ people doing either the half or the full.  It was still dark but the crowds were getting bigger and bigger. 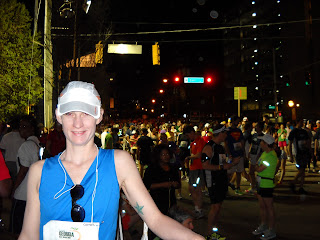 As race time got closer Jen had to get to her corral and me to mine.  I was so glad she suggested doing this; it was great watching her go through the process of preparing for this race.  As a dad, it just felt good!

I made my way to my corral - it was just a sea of people ahead of me.  At one point I saw a sign to the left that said "1/4 mile to Finish Line" 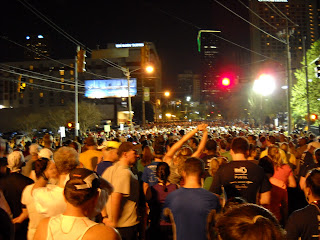 And we were off!  It took me just over 11 minutes to get to the starting line.  Yes, this absolutely qualifies as a back of the pack guy :)  I've done enough of these mega-races to know what to expect for the first few miles and this race was no different: jockeying for position, side stepping, watching for potholes,...

They had incredible race support the entire race.  There was actually some competition that we (racers) are suppose to vote on which crew provided the best support.  They were all good, lively, encouraging, and some where quite funny with their signs.  Actually after catching these signs out of the corner of my eye, I doubled back just to take their picture: 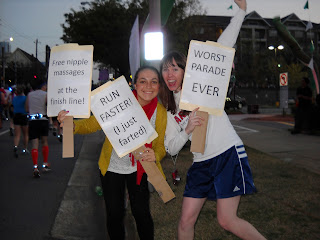 The sun was starting to come up as we rounded the corner by Ebeneezer Baptist Church and the Martin Luther King Jr. National Historic Site: 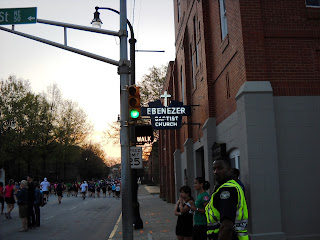 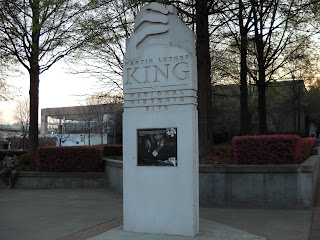 They had great support for this race - plenty of water/gatorade stops, great traffic control, they just did an excellent job on this race! 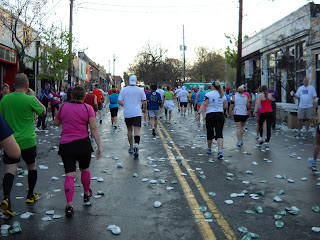 As we made out through Little Five Points I noticed this sign that read "We're all here 'cause we're not all there!" 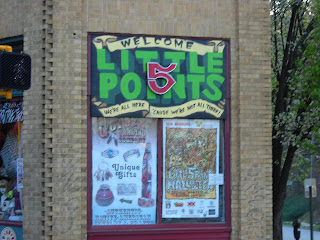 Next we made our way to the Jimmy Carter Library and the Carter Center: 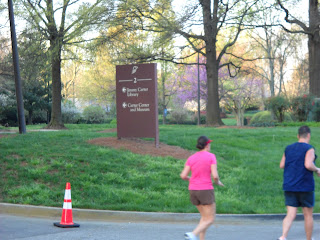 Even as we made our way past Piedmont Park around mile 9 or 10, it was still crowded! 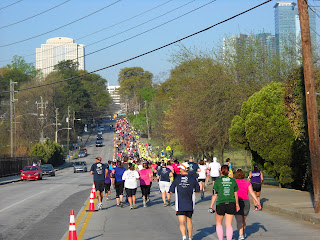 Towards the end of the course we went through the Georgia Tech Campus passing the Yellow Jackets football stadium: 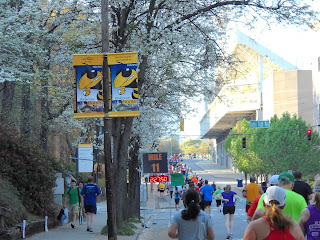 It was a great race; it was a hot day for a race too!  As we passed through the finish line, they gave us water, chocolate milk, medal, cold/wet cloth, and a pre-package end of race food bag from Publix.

I found Jen at our designated meet up place after the race.  She looked in pain and had ice wrapped around her knee.  The knee pain started at around mile 6 and she is not sure from what.  Maybe shoes?  Maybe a twist?  Not sure.  She is going to follow up this week with it to see what's up.  She was very happy to have finished her first half marathon but was disappointed with her time as this slowed her down.  I told her a finish is a finish - and that is what matters. 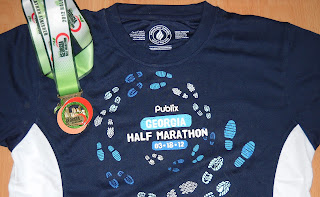