Event 19 - The Great Saunter (around Manhattan)

On Saturday May 5th, 2012, I had the opportunity to participate in an incredible event, The Great Saunter.  This 32 mile walk around Manhattan started at the Heartland Brewery on the lower East Side, crossed over to the West Side, up to 208th street, crossed back over the East Side and back down to Heartland Brewery at the South Street Seaport.  It was a wonderful 32 mile walk!


The day of the event:


I am very fortunate to have a sister and brother-in-law who are so willing to go way out of their way for me.  They, Laura & Ted, were up with me way before the crack of dawn to drive me in from NJ to the South Street Seaport; we were on the road at 6:00 AM.  It would have been a tough commute on buses/subway into the city at such an early hour.  We got there about 7:00ish and quite a few folks were already there getting ready: 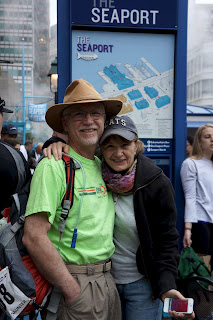 As this was a saunter (not a race) there wasn't an actual start.  Basically at 7:30ish, each of us took off towards the westside of Manhattan.  It was a foggy morning with temperatures in the high 50s.  Perfect weather for a 32 mile walk!


The first landmark we came across was the Statue of Liberty.  It was foggy but we were still able to see it:


It wasn't too long before I noticed quite a few people fishing, this guy had some luck! 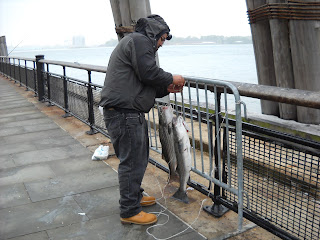 As we made our way up the westside the first thing I noticed were these huge building, right on the water (except for our pathway), and many of them:


The concept of this event is much more of a social event, it was not a race.  So it was fun meeting and talking with many of the other saunterers over the next 10+ hours.  I met at least 15-20 people on the walk and had a great time getting to know about them.  Some were locals who lived in Manhattan, some lived in surrounding areas, some from other states, and some from other countries.   For a few of them, this was not their first Great Saunter - I learned much from what they had to share.


At this point, the guy I was walking with knew a lot about the city.  He pointed out the following building in the fog (I would have missed this so I am really glad he brought it to my attention), the new World Trade Center:


As we headed north, the next thing I noticed was a Little League game in progress:


This was turning out to be such a great walk - everything I thought it would be.   I was amazed how many parks there were.  The folks I met up with next lived in Manhattan and they were told that one of Mayor Bloomberg's initiatives is to have a park within 10 minutes of everyone who lives in the city.


There was a lot of traffic on the some of the paths.  In some cases they had multiple paths side by side, one for bikes, one for walkers, and they actually had street lights with the image of a bicycle: 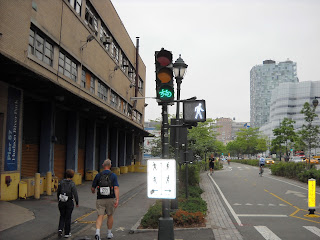 At this hour of the morning, the paths were not crowded.  But as the day progressed, there were so many more walkers, runners, and bikers.  It did not occur to me before the saunter that this would be an issue.  When the path was wide and/or very organized like this above, it was not an issue.  But in some of the very narrow pathways it got a bit hectic at times, especially on the Eastside.


Next we made our way to Midtown on the West Side and saw the Intrepid.  I've never been to it, but one of these trips I do have to make my way to see it. 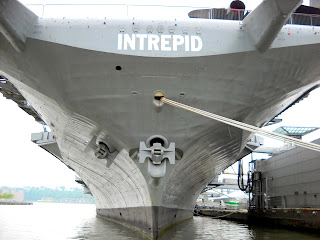 This next picture is the bottom side of the West Side Drive.  I was intrigued by the round, green things coming down from the highway above - basically they are down spouts for water drainage from the highway: 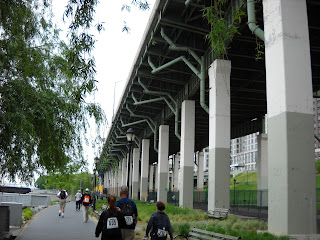 An indicator of whether or not a person was pre-registered or just decided to do this at the last minute (if you can believe that!) was their bib number.  The higher the bib number the greater the chance of a registration that morning.  One woman told me she and two other friends decided the day before to do the Great Saunter - but she was the only one who showed up!


As we were making out way towards the Upper West Side, I noticed another Little League games going on (note to self: if I do the Great Saunter again, keep a count of Little League Baseball fields - I bet the number would be close to a 100!).  The following field intrigued me because of where the field was with the bridge structure, massive towering buildings, and this Little League field :) 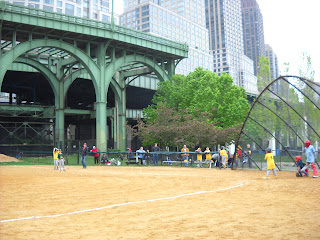 It was fun walking with groups when we came to a point where you could actually go different routes/paths/streets and still meet up at a certain point.  So as we approached the George Washington Bridge, a few of us decided to take the trail toward the GW bridge.  For a time, it seemed as if we were nowhere near a city: 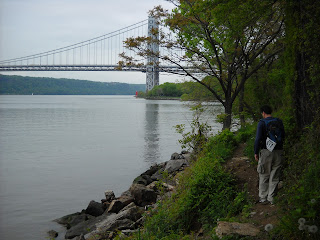 As we passed under the GW Bridge and made our way north, once again, you would not think we were anywhere near a city: 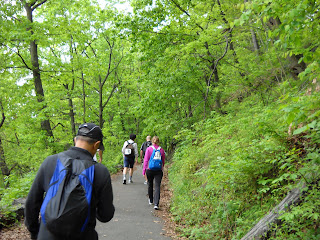 As we made our way out of this wooded (well maybe a few more blocks than that : ) area we were at the half way point on 208th Street and there was a local Farmer's Market in progress.  This was good as it was lunch (and change of socks!) time. 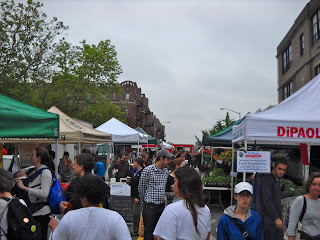 I didn't stay too long, had a quick bite to eat, changed socks and headed east for our cross town over to the East Side of Manhattan.  This was different as the entire time so far, we were very close to the water - not for this segment though.  It was much more of "city": 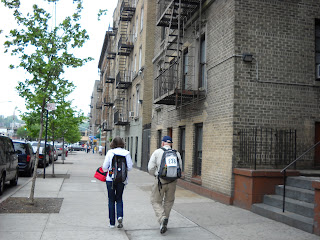 We made our way cross town and down through Spanish Harlem.  There was a lot of zig zagging, times where we needed to check the map, and times when we had to guess which way to go.  I was quite fortunate to be walking with folks who had done the Great Saunter before and knew their way around.  On my own, there would have a really good chance I would have gotten lost in this area. 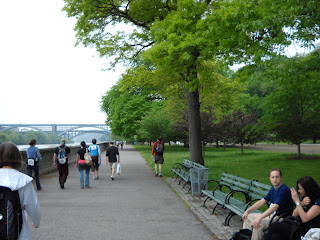 As we made our way down, the pathway ended, started, ended, started again,... So we were spending more time on the city streets.  I liked this aspect of the Saunter.  We were under Harlem River Drive at one point when we noticed Yankee Stadium in the distance (it was actually across East River, in the Bronx):


Once again, at this point in the walk, pretty much as long as you are heading south, you will eventually get to the finish.  This next part was not on the actual Great Saunter route, but the people I was walking with had done it before this way, so I followed them. 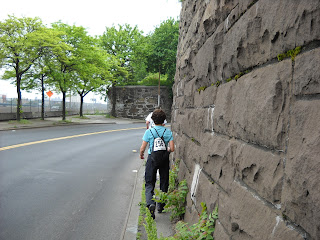 Back to a path by the water (59th Street Bridge in the distance): 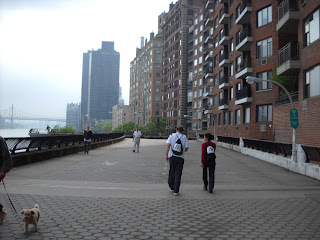 And when we did reach the 59th Street Bridge, it was the 26.2 mile mark, that was the marathon point - only six more miles to go!


Once again, no waterway path, had to go back to city blocks:

As we made our way back, we spent much more time under overpasses and we had three more bridges to go under:  Williamsburg Bridge, Manhattan Bridge, and the Brooklyn Bridge.  On a map they look fairly close together.  However, they were not when you walk them! 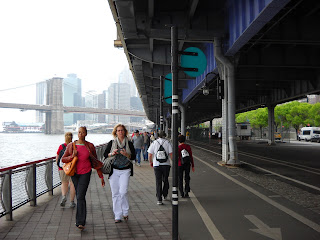 With exhaustion setting in over the last few miles and such a desire to finish and feet hurting and legs hurting, as you can see, fewer pictures were taken : )

It was time for a beer (or two) at the Heartland Brewery!   Laura & Ted were already there and lucky enough to score a table (yeah it was crowded!).  It was fun as a woman was there waiting for her son & daughter to finish and was happy for us to join here.  She was in town from Ottawa, CA just for the Great Saunter.  As it turned out, she had attempted the Saunter but decided to pack it in at mile 22 and take a cab back.  Prior to this event, the longest distance she had ever walked at one time was 12 miles.  So doing 22 this day was a huge accomplishment!  However, she was very determined to be more prepared and do it again next year.

891 walkers participated this year with 592 finishing!

The organizers and volunteers did a great job before, during, and afterwards.  They were located at various spots in the 32 miles to handout water, apples, granola bars, and my favorite of the day - clementines!!!


Link to slide shows of the things I saw going clockwise around Manhattan while doing the  2012 Great Saunter, information on Shorewalkers, ...

at May 06, 2012
Email ThisBlogThis!Share to TwitterShare to FacebookShare to Pinterest
Labels: The Great Saunter