I volunteered to help out with the Sutallee Trace Trail Challenge 10 mile race this morning.  A few weeks back they (Mountain Goat Adventures) were looking for volunteers for this race and they were offering free entry into any upcoming race  this year.  Works for me.  I've volunteered before, it's usually a fun 'feel good' thing and you typically receive a T-shirt, some snacks, water,...  But Lisa (RD @ Mountain Goat) had a much better offer - include free entry into one of their future races.  So I took them up on it. My job, 10 mile race sweep.

Basically this meant I'd make sure I was behind the last runner (which is very normal for me anyway : ) and I'd remove all of the orange ribbons (hung all over the pace so folks don't get lost), take down the orange signs, pick up the orange flags,...  in essence 'sweep' the course.

So, I lined up at the back of the pack for the 10 mile race:

and we were off!

It wasn't too long into the race before crossing on of my favorite trail bridges: 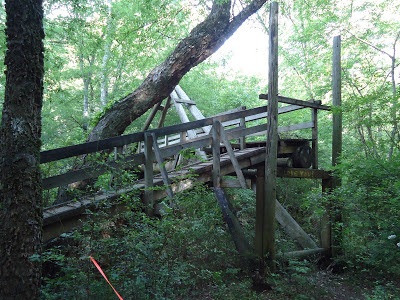 But soon it became time to go to work.  The rest of the time I was looking for and removing the following: 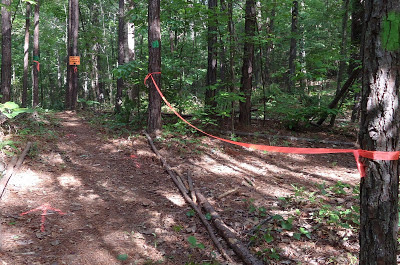 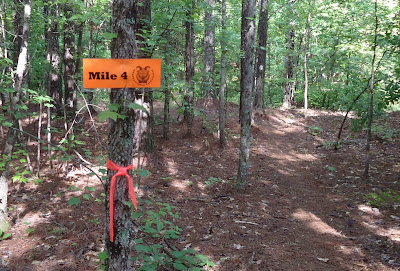 Some were easy to remove, some were not.  Also, in the spirit of keeping the trail clean, any other trash that was laying around went into the bag.  I did not come across too many empty GU Energy Gel packs.  The ones I came across, I hope they were accidently dropped by someone and not just thrown on the ground in the woods - but that might be a whole other topic of discussion.

There was a bunch of poison ivy on the trail, I did used Tecnu afterwards - sure hope it works.  I did get lost twice.  This was situational as I was the one taking down the markings.  It was sort of fun - I just had to find the 'next' orange marker on one of the paths,  But it did get to the point of looking at the soil, leaves, pine straw and trying to figure out if a few hundred people had just gone over an area!  It became very obvious when the only sneaker prints were mine : )

The only thing that really went wrong though - was my fault & could have happened anywhere -  I lost my car key on the trail in the woods.  I had it on a carabiner but at some point the key got off.  Long story short - had to call my wife after the race was over to drive the 50 miles and bring her key.  Lesson learned on my part - WILL ALWAYS HAVE SPARE KEY!

So even though I did not race this race, I still did the race and had a pretty good workout from it.
It counts : )

at May 25, 2013
Email ThisBlogThis!Share to TwitterShare to FacebookShare to Pinterest
Labels: poison ivy, trail, volunteer