I decided right after the first of the year that I wanted to do this race.  It's a hometown, well sort of hometown, local race.  As usual, once paid for and on the calendar, the training schedule gets created and I do get more serious about following that training plan.  What I did not anticipate was getting the flu earlier this month (and I did get a flu shot!).  Unlike a cold or an upper respiratory infection, the flu throws a major curve ball to the training plan.  So for this race, definitely not 100% prepared, but close enough - just super glad that I did have a few weeks to get strength back.

Think I read somewhere that they needed over 2000 volunteers to help out with putting the race on, so I volunteered to help out at the Expo handing race packets.  The shift I had was on the Friday before the race from 2:30-7:00 PM at the Georgia World Congress Center.  It was fun interacting with participants picking up the race bibs & shirts, and such.  The odd thing about handing out shirts, you sort of become a pseudo expert about the shirt and many actually expect you to be an expert on the shirt:

"How come they don't have male/female sizing"?

"Should I get a different size?"

"Can I get a different size?"

"Do you have to wear this for the race"?

I was up at 4:15 AM.  Being an early bird anyway, this really was no big deal.  One last check of the hourly forecast showed temps in the 40s meant an extra layer and gloves were in order.  A stop at Quiktrip for a blueberry muffin & another coffee and I headed towards Marta.  For me, it is just easier to take to subway down to the race.  Virtually everyone on Marta was heading down for the race, we exited at the Peachtree Center Station and just followed the crowd to Centennial Olympic Park.  It was still dark but the park was already packed with folks just waiting around for the race to begin. 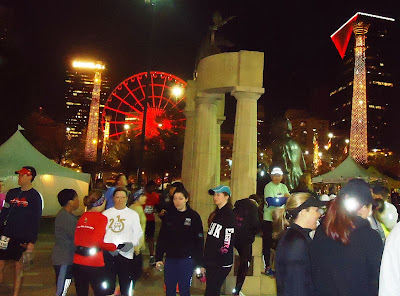 Of course it was not too much later before the normal pre-race lines began to form.  When you have upwards of 10,000 people who were hydrating for the race...  The good thing about this race, plenty of porta potties. 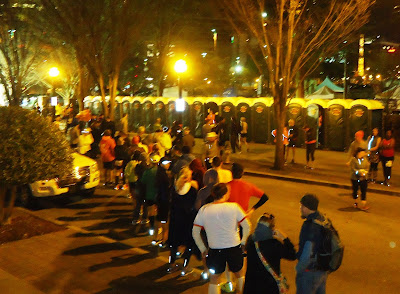 As 7:00 AM approached everyone was getting to their corral for the start.  They had five corrals - A, B, C, D, E with the fastest runners in corral A and the slowest in E.  I took my usual starting spot in corral E.


At 7:00 AM on the dot corral A was off.  Each of the remaining corrals made their way closer to the starting line.  By the time corral E was at the starting line, it was 7:12.  No worries though as each race bib had a chip in it and an individual's race time did not start until you crossed over the (electronic chip reading) starting line.


We weaved our way through downtown Atlanta, through various neighborhoods, and parks.  I always enjoy seeing the city this way as you miss many things if you happen to drive through.  My favorite vista on this course came in between mile 3 & 4, a great view of Freedom Parkway.

Success for me in any of these races is to simply finish the race.  I do have a secret goal for half marathons though, it is to finish under 3 hours and for this race I did.  It was a good race.

at March 26, 2016
Email ThisBlogThis!Share to TwitterShare to FacebookShare to Pinterest
Labels: Atlanta, half marathon