Terror off the Nature Trail - The Crime


This is a true story.  It happened to me in a suburban park north of Atlanta in 2003.  I can't go by the area where it happened without hearing a gunshot - in my mind...

I was working from home for a Hewlett-Packard R&D lab out of the San Francisco Bay Area, so I had the flexibility of going to the park for a jog in the earlier part of the day.  This was a good thing as Atlanta summers can be brutally hot.

One week-day August morning, I headed to Bunten Road Park for a 45-minute run.  At the time, I was training for a half-marathon, so a 45-minute run was not that big of a deal - more on that later.  The park had a one mile blacktop path and a half mile trail section - the Nature Trail. 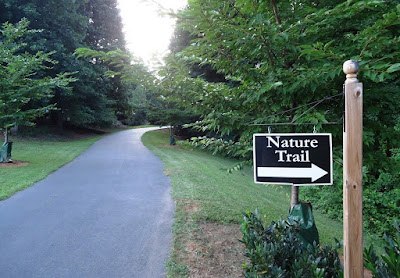 I always changed-up my route: sometimes on the blacktop path; other times on the trail in the woods; sometimes I switched directions; anything to make the run a bit more interesting.  Because it was a weekday morning, there were only a few others on the path, but I noticed one couple in particular, because I had passed by them a few times earlier.  They were simply walking and talking, quite normally, doing nothing out of the ordinary.  I was about 30 minutes into my run when I came off the nature trail and onto the blacktop and passed the couple again.  As I did so, I heard a third person calling out to get their attention, and I saw a guy in my peripheral vision.  It appeared as if the three knew each other and were exchanging a friendly greeting.  By the time I was about 30-40 feet past the couple, I heard it.  Someone fired a gun.

I remember stopping and turning around to look.

The woman was screaming; the man she was with had dropped to his knees.  I saw the other man moving towards the couple.  Right, wrong, or indifferent, my brain pieced together that the second guy was the one with the gun.

Fear had taken over.  What should I do?  Stay?  Go towards them - to help?  Run away?  Thoughts were racing through my head at lightning speed.  I was scared.

One thought came to the forefront - get to a phone and call for help.  I turned and sprinted away in search of a phone.  The thought of getting shot in the back was real.  The gunman had seen me.

I sprinted about 100 yards and noticed a police phone box on the restroom building.  Great!  I was out of the line of fire by then and all I needed to do was get to that phone and report the incident.  The police phone box was locked!  WHAT??  I sprinted away to look for help and came to a baseball field where I saw a guy on a riding lawnmower cutting the grass.  I was in luck - he had his cell phone and called 911.

At that point, my thought process got weird and more confused.  What do I do now?  There's a man in the park with a gun that he’s already fired.  I don’t know if anyone was hit, dead, in pain, or in need of help.

I jogged to the upper parking lot where I’d parked my car, and noticed two women who had just arrived for their morning run/walk.  I told them what had happened and advised them to delay their run.  In hindsight, it must have been surreal for them to be standing in that quiet county park, where nothing ever happens, listening to stranger tell them this story.  Shortly after that I saw multiple police cars flying into the park.  I was relieved.

I don’t recall checking my heartrate, (I always ran with a heartrate monitor strapped around my chest) but I’m sure it was probably through the roof.  The adrenaline rush was wild.  I headed around to the front of the park, out of the line of sight from where everything took place, looking for - I’m not sure what, but I needed to know what happened.  Eventually I saw a group of police officers and other people scattered around in the area where the shot was fired.  The situation appeared to be under control, so I made my way over to them.  I noticed the Parks & Recreation Director, whom I knew, so I asked her about the current situation.  The good news was that no one was injured or killed.  The gunman had actually missed, and the police had him in handcuffs.  When I told her what I’d seen and heard, she immediately took me to one of the detectives.

The questions began, and the detective wrote down everything I told him.  When he was through, he told me not to be surprised if I got a follow up call as a crime had been committed and I was a witness.

continued in Witness for the State