If there was such a thing as Most Unique 5K Name Award, this race might have a shot at winning it.  Ordination Rock, as explained to me by my grandson, is a glacial erratic - a gigantic rock resting in an area where it just does not belong, apparently deposited there by a glacier (a very long time ago) and just left there after the glacier melted.


Anyway, this glacial erratic is where the start line was for the 5K. 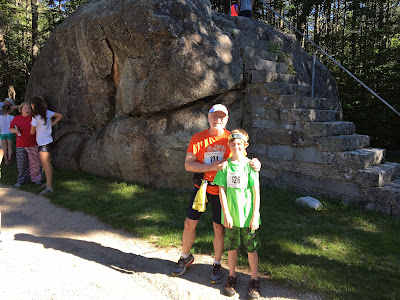 This was a wonderful, small town, local, fund raiser for the library race.  There were 143 participants.  One of the things that caught my attention in the first mile, while going through the Remick Country Doctor Museum & Farm were some unique spectators! The race ended at the school and they had my most favorite after race refreshment - watermelon!  For me, on a hot summer day after race, there is nothing better than watermelon - the best!


After the race, the day's activities included a few more fun 4th of July events:


The first was a parade through the downtown area of Tamworth, the kids loved it as they were throwing candy off of each float!   But when the firetrucks came by, with their sirens blaring... 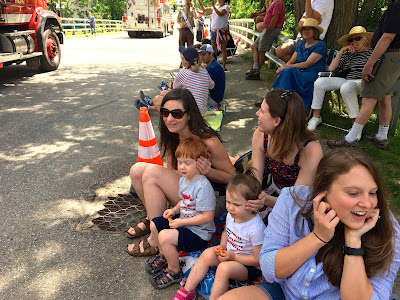 Towards the end of the parade, the Tamworth Union Hall float came by with two of my grandsons and son-in-law...

Back at the house, the day before...