Tashka 25K - Trail Race– December 10, 2011
Distance Event:  #11
State: #3 - Alabama
The full name of this race is: The Nicholas Wilson Memorial Tashka Trail 50K & 25K.  It is a trail around Lake Lurleen (near Tuscaloosa, Alabama), one lap around the lake for the 25K and two for the 50K.   The event was limited to 300 people and my guess, about 125 participated.  I did attempt to find who Nicholas Wilson was and why this race is named in his honor but was not successful.  I signed up to do the 25K.
Pre race:
As this race was a 4-5 hour drive it was not realistic to wake really early and drive so I took a few hours off of work and headed towards Tuscaloosa on Friday.  Once in town and checked into the motel headed over to the Athletes Foot store for race packet pick up.  Talked with the folks there for a bit, got directions to Lake Lurleen State Park for in the morning and headed back to the motel.  On the way back spotted an Olive Garden restaurant - plate of pasta and a beer at the bar – back to the motel, get things ready for the morning and get some sleep.
Woke up at a ridiculous time 2:30 AM!!!  Actually to my body clock it was 3:30 as this was in the Central Time Zone.  Still…  Eventually began my standard race day stuff – coffee, bagel, checking the hour by hour weather report to figure out to wear, listening to my race morning music on the iPad, and getting dressed.


Wow – it was really a good thing I got directions to Lake Lurleen the day before, this place is way out in the woods!  I was very happy to see other cars – they had to be going to the same place at that hour, in the dark, in the woods.  I like to be early and I was.  It was about an hour before race time so I had plenty of time to use the porta-potty, walk around a bit, and try to stay warm.  It was about 31 degrees with a 5-10 mph wind.
The Race:
We started the race with a young boy jingling a strand of jingle bells.  Runners were high fiving him as they passed.  He was smiling and grinning from ear to ear as I passed him.  The 25K and 50K folks all started out together; the first quarter mile or so is on the road leading to the trailhead.  Much jockeying for position takes place during this part because once you get on the trailhead there are two incredibly steep single track inclines.  So there is a time advantage to not be towards the back as virtually everyone single file walks up both inclines.  I am a back of the pack type of guy because I walk/jog and I do not want to hold up anyone who is running so I did have to wait for a bunch of folks ahead of me to make their way up the inclines.   Once at the top of the two inclines most were already out of site and it was just me and a few other back of the pack folks. 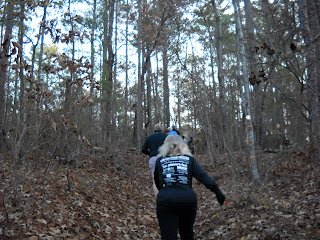 With so few doing this race (~125) the back of the pack was pretty scarce; there were just a few of us so for most of this race I rarely saw anyone else.  They had four (I think) check in points/aid stations.  It was always nice to see the volunteers at each station.  They were great volunteers, smiling, greeting, encouraging, nice people!
The trail was covered with leaves.  This is normal.  However, this makes it nearly impossible to see or know what is under the leaves (rocks, roots,…).  I only fell once – tripped over something, fell face first but luckily put my hands out quick enough to stop my body from crashing into the ground.  I lost count of how many times I almost tripped (20-30 probably).  Trail races are more difficult than road races because of things like this.  Trail running requires one to look down more than ahead.  Both are necessary but the placement of each foot must be calculated while running in the woods.  On the road, not so much, you need to be aware of pot holes and such but not every step.  It is more of a challenge doing a trail race. 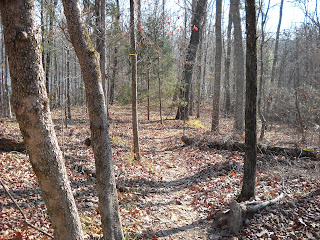 I did not plan on this, but I started this race last.  There was no one behind me when the race began.  When doing these races, I am not racing against anyone else, I am not out there attempting to be faster than anyone else, I am simply out there for health, fitness, enjoyment, and finishing the race under the official time limit.  For me the competition is me – well at least the thoughts in my head saying things like ‘you cannot do this’, or ‘cannot take one more step it hurts too much’.  Therefore it does not bother me when someone else passes me and likewise I do not feel any sense of accomplishment when I pass someone.  With that said, starting dead last was a pretty neat thing.  No one passed me during this race.  I have never been able to make that statement before J On the other side of that, I did get the opportunity to pass a number of people during this race and I rarely get a chance to make that statement also. 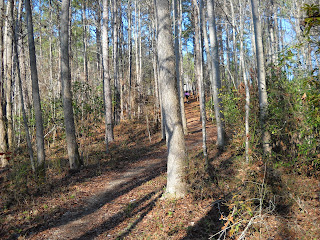 Being out in the woods and doing a race like this for three or more hours will take your mind in many places. The thoughts I have are typically all over the place and they can and do contradict each other at times.  For instance, during this race my thoughts went from never doing another trail race as long as I live to signing up to do the 50K instead of the 25K next year.
The only negative part of the race, and this has nothing to do with the race or the people who organized the race, was the amount of trash left on the trail by the runners (way beyond, I mean way beyond the aid stations).  I do not understand the mentality of throwing trash on the ground in the woods (or anywhere).
I only felt cold once (after be warmed up after the first mile) while out on the trail.  It was where we came out of the woods and followed the trail along side of the lake.  The wind that was coming off the lake made it feel colder that it actually was.  But you felt it immediately.  With only two miles to go it was very tolerable – the end was near and that is always a huge motivator. 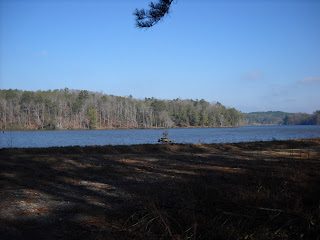 I crossed the finish line at the 3:29 mark.  I forget how many seconds it had.  So basically it took me 3.5 hours to do 15.5 miles.  My first 25K!  I loved what we got at the end of the race instead of a medal – a pint glass with the topographical image of Lake Lurleen with the race name over it and a pair of running socks!   I will use them both and I am sure the beer WILL taste much better in that pint glass!  The after race spread was the best I have ever had: pizza (warm and plenty of it), Panera Bread  bagels & bread, hamburgers (made on the grill right there), soda, water, coffee, cookies, pretzels, bananas, candy, and their world famous potato logs (they had these at the aid stations also).  I’m sure they had others things but that is all I can remember. 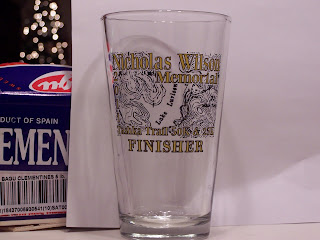 This was a fun event, nice trail, nice people, nice day,… just everything was good.  Garmin stats: 3 hours, 29 minutes, average heart rate 139, 85% of max, and 1352 calories spent - it was a good workout.
at December 11, 2011
Email ThisBlogThis!Share to TwitterShare to FacebookShare to Pinterest
Labels: 25K, Alabama, back of the pack, Tashka, trail