I read the race description on the Mountain Goat Adventures website:


"This won't be your run-of-the-mill trail run...expect a course with a bit of everything including buff singletrack, ATV trails, knee deep river crossings, embankment climbs, coasteering, and some craggy scrambling."

Hmmm...  I've never done a race with a river crossing, but what the heck, it's warm outside, and I have no idea what coasteering or craggy scrambling are, but again, what the heck.  So I signed up.


This was my 3rd Mountain Goat Adventures race and Lisa (Race Director) always has something important to tell us about the race just prior, so all gathered round and listened: 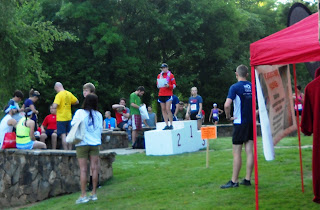 Once again they had a 10 mile and a 4 mile version of the race; I signed up for the 10 mile.  So at about 8:00 AM, we were off.  The first couple of miles were uneventful.  However, we all knew that just after mile 3, we'd be in the river.  I caught glimpses of folks in the water as I made my way along the river and just as promised, at mile 3.1, there it was: 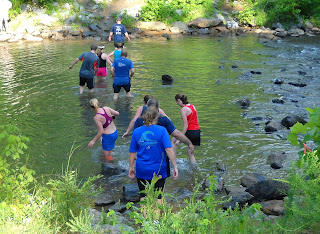 Okay, I really did know better, but I wanted to get pics of the river crossing... 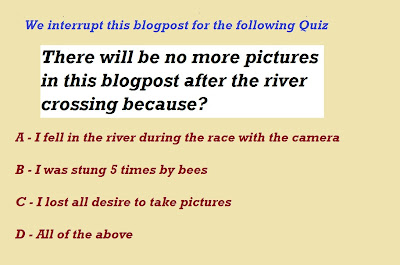 Yep, it just wasn't my shoes and socks that were wet after I fell into the river!  Oh well, I'll try to dry the camera out later : )


Okay, the river crossing was checked off the list and now we were looking to do some coasteering or craggy scrambling.  So we carry on on the course and all of a sudden - BEES!!!  People were getting stung left and right, I got stung twice, immediately started running as fast as I could to get away from the bees.   So we were about a hundred yards up from the bees when the trail takes us down an embankment to riverbed, with about 6 inches of water in it.  Well this was not a crossing, the trail was actually in the river bed.  So we are all queued up in the 6 inch deep water making our way through the river bed, when all of a sudden, -BEES!!!  Once again, GET.OUT.OF.THERE as fast as humanly possible.  Got three more stings this time.


This was no longer fun.


But the crowd thinned out, the 4 milers were gone, hanging with some other back of the pack folks, and no more bees.


So Jeff, Amanda, and I are moving along at similar paces, talking, laughing a bit - okay this is becoming fun again.  We come around a bend and notice a girl walking very slowly and we ask her if she is okay.  She (Katie) was having an allergic reaction to the bee stings!  Jeff and I stayed with her and Amanda headed for the next aid station to get help.  Gave Katie some Gatorade, checking her breathing, observing her, this was getting serious.  She felt like she was going to pass out, so we sat with her waiting on help.  At that point, Jeff stayed with Katie and I took off for the aid station to measure the distance.  Got to the aid station, they were on the phone with 911.  Wasn't too long before Race First Aid, Fire Rescue, and Police were all there, on bikes.  This was way too much of an adventure.


Back to the course.  The bee stings were hurting like hell, but I'll take that any day over an allergic reaction.  Once again, a few uneventful miles, but uneventful was so welcomed by this point.  When I got the end of the trail I cross paths with one of the Race First Aid guys and inquired about Katie.  He confirmed that she was getting the medical attention she needed.  That was good to hear.


I finished the course, but I have no idea what my time was.


I still have no idea what coasteering or craggy scrambling are.


at June 16, 2012
Email ThisBlogThis!Share to TwitterShare to FacebookShare to Pinterest
Labels: back of the pack, bee sting, river crossing