For this 10,000+ person Thanksgiving Day event (Half Marathon, 5K, Mash Potato Mile, Gravy Gallop) they needed 1400 volunteers.  What caught me off guard on this, they actually got the 1400 volunteers before any of the races filled up so they shut down volunteer registration!  I just would not have expected that to happen.  I don't know for sure if this had any impact on this or not, but they gave each volunteer a fleece pullover for their volunteer shift.  And if you volunteered for two shifts, they gave you two.  Yep, I volunteered for two.  One of my 2012 goals was to volunteer five times.  Well up until this race, I only had three, so I needed two more.  So the fleece pullovers were a nice incentive.

Shift 1:  2:00-6:00PM Wednesday at the Expo giving out shirts to the race participants.  I was assigned to the "Medium" table, the sizes were unisex.   Things went pretty smooth for the first few hours.  But that last hour brought a number of unhappy "customers".  You see, they ran out of of size "Small" and so they all came over to the "Medium" area instead.  Some, let me say most, took this in stride.  Even if they were upset that they did not get their shirt size, the fully realized that we were just volunteers and that we had nothing to do with whatever created this problem - they treated us appropriately.  However, for those who thought it was okay to dump on us, the volunteers, about this, I have one simple suggestion for you:  you need to be a volunteer.

Shift 2:  5:30AM until the beginning of the race, "corraller" for start wave "E".  They allowed people who were doing the race to volunteer for this job on race day.  It was fun, basically just a little bit of crowd control for 7000-8000 people. 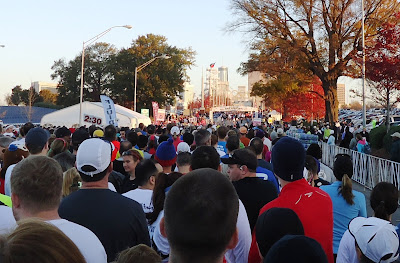 I was a bit unsure of even doing this race after the knee "thing" 12 days before this at Soldier Marathon.  At that time I said there is no way I would do this race (I'd already paid for it months ago).  But between the knee brace, ice, rest, elevation, the x-ray coming back okay, and no pain at all in the last five days, I began to think, well maybe.  So on Sunday I did 5 miles.  It went fine, no pain, no issues, so I decided to go ahead and do this race as planned.  The only caveat, I'd wear the knee brace just in case the knee flared up again.

And we were off.  So many people, crazy crowded, but that is to be expected in any mega-race event.


One of the things that they do as a by-product  from the race proceeds is to donate money to the 17 churches that are passed on the Half Marathon course for their feed the hungry programs during the holidays.  This year they donated $25,500 for this cause.  This is a good thing.

The knee was feeling fine as we headed over the first bridge.  I suspect the knee brace altered my gait and that can cause other areas that don't usually hurt to complain a bit.  I started thinking about the knee bone is connected to thigh bone..., they all have to work together and when something is wrong, other parts will attempt to compensate.

The knee and the hip hurt a little bit during the race, more so towards the end, but nowhere as bad as at Soldier.  What ever I had/have still might need some time heal.  I know during this race I was super glad it was not a full marathon!

I slowed down for this race and took in more of the sites along the way.  This was the fifth time doing this race, twice as a runner years ago, and third time since doing the walking.  As part of each participant's fees, all finishers get a medal: 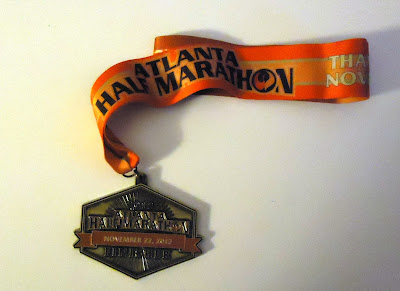 I seem to recall years ago (2002, 2003) when I did the Atlanta Thanksgiving Day Half, they did not give out medals for the Half.  Something changed during that time, the prices went up and now finishers get medals  ;)

The other thing that I noticed, these races are getting bigger sponsors, sponsors not necessarily connected in any way to the sport.  Volkswagen was the official sponsor of this event, they provided pace cars, and had booths set up at the expo and at the finish line.  They were handing out gloves and reflective flashers with their logo and "Das Auto" on them: 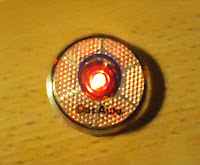 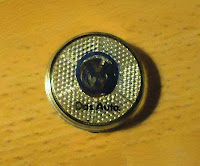 Perfect for those early morning or night walks!

So, although I prefer the smaller low key races, there is something to be said for these larger mega race events - I was able to get a new pair of Brooks Ghost 4 running shoes at the Expo for $55, half price, a long sleeve technical shirt, two fleece pullovers, reflective flasher, and a free parking pass (this was the first year the venue (Turner Field where the Atlanta Braves play) charged $5 for parking).

at November 22, 2012
Email ThisBlogThis!Share to TwitterShare to FacebookShare to Pinterest