Did the 13.1 Marathon in Atlanta this morning..  This race is so close to home it's just hard to pass it up.  Think just shy of 3000 people did the race.

With the race organizers telling us that parking would be limited (and suggested taking Marta (Atlanta's subway))  figured I should get there even earlier than I typically do : )  Arrived with plenty of time to spare, enjoyed a bunch of tunes on the iPod, very relaxing prior to a race.  So relaxed, noticed a resting heart rate of 45,  figured I should walk around, before a fell asleep!

One of the things I really like about this race is how organized they are.  They do this race series, 13.1 Marathon, all over the country so I guess they have some really good race day set up experience.   The volunteers were setting up the finish line area when I got these shots:

Eventually got to my starting area.  Basically they had three areas, area A & B for fast runners and area C for everyone else.  But in area C there were signs with expected finish times so you could position yourself in the right area.  It all worked out pretty good.  The one odd thing about this race, it started at 7:00 AM with sunrise at 7:31 AM.   Not a problem, just different.


My plan for this race was to walk the entire race with a goal time of in between 2:40 and 2:50.  I've done half marathons in the past in that range but that was when I was still doing some running mixed in with the walking.   So that was my challenge in this race.

The only thing that stands out in my mind about the course was the hills.  None of them were "killer" hills but there were quite a few of these rolling hills.  Hills always makes it harder (heart rate rising) and always takes longer.

And it was good. 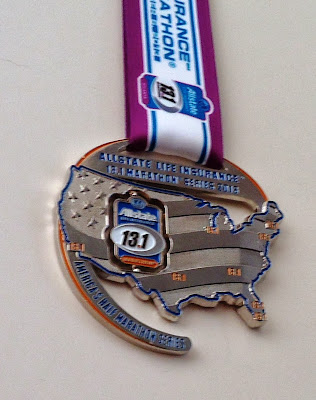 at October 06, 2013
Email ThisBlogThis!Share to TwitterShare to FacebookShare to Pinterest