So it's early Tuesday morning, about 20 degrees outside, listening to the radio - 93.5 WMWV in North Conway, New Hampshire...

and the sports report comes on and the first thing they broadcast - the results of the White Mountain Milers Half Marathon!   It even got reported before they reported the Boston Red Sox taking a 3-2 lead over the Cardinals in the World Series! 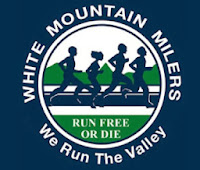 Besides doing this race with Jen, I was also looking forward to it because they had a "Walking Division" that you could sign up for it - so I did.  So this race was to be a bit different from any of the other 41 I've done so far because I actually had a chance at placing 1st, 2nd, or 3rd in the Walking Division.

We got to North Conway early enough to pick up our race bibs and cycle through the porta-potty line one time.  They asked during the announcements to line up according to your minutes/mile pace so I made my way towards the back.  I was hoping to walk the race in the 12-13 minute/mile range so I got to the sign that said 12:00 and waited for the race to start.

The race started out on the backside of the Schouler Park Train Station and I could see the guy way up front with the air-horn as the race started.  My assumption was (as this was a chip timed race) that my time would start when I crossed over the start line.  But as I approached the start, I didn't see any starting mats.  Hmmm... so I figured it was chipped timed at the end only.   So around the start line I started my Garmin.  Basically it added a minute or so to my overall time.  Funny, usually I could care less about this type of thing as I do these races for fun, health, & exercise - but since I was actually trying to place in this race I was not happy about losing that time :)  Oh well.

The race took us through the main street in North Conway and plenty of people were there cheering everyone on.  By the time we were at mile 1 the crowd support thinned out.  But in a ~600 person race, that is pretty normal.

The hills were not too bad in this course.  The only thing that was a bit frustrating (and a bit scary at times too), they did not block traffic on the majority of the course and we were all on the side of the road with traffic.  Most drivers were very considerate and took plenty of precaution not to hit us, a few were driving way too close - was not happy with them.  Most of the main intersections either had a member of the local P.D. or a race volunteer.  There were no problems at those intersections.

Since I was actually trying to place in this race, I did not stop to take any pics during it.  There were plenty of very picturesque views - the White Mountains provided some incredible views, quite a few farms, and my favorite - a covered bridge from 1890.

Afterwards was fun as we had a lot of family there supporting Jen & me.  It always adds a really nice dimension to the race when family is there at the finish line!  My sister and brother-in-law treated us to lunch in one of the shops in downtown North Conway - it was very nice and much appreciated!

Later that night we had a surreal experience for a post race desert treat - ice cream from the Sandwich Creamery.  Luckily Jen & Will knew the way there (it would be really hard to find in the dark not knowing where you are going, it is really in the middle of nowhere) and the surreal part - it's the honor system!  No one is there, it's self serve from a freezer of prepackaged half pints, pints, quarts.   You just put your money in the slot for the ice cream you take.  It may have been the best ice cream I've ever had!


at October 29, 2013
Email ThisBlogThis!Share to TwitterShare to FacebookShare to Pinterest