About a month ago, while heading home on the Amtrak Crescent after the Great Saunter, I was thinking about the goals I have for myself on this blog - 100 races/events & 10,000 miles and I can retire from full time work.  Currently at about 8,300 miles and with the fitbit tracking, the 10,000 mile goal should be met in just over a year.  However, for races/events, I'm at 63, a little behind.  There is no way I'm going to do 37 races in a year!  But it looks like I need to focus a bit more on races/events.


So there I was on the train (NYC - Atlanta) thinking I needed to start looking for more races.  Luckily the train did have wifi so a few clicks and I'm on the race calendar on rungeorgia.com.  I am at the point where I really don't like doing marathons so I don't even bother looking at them.  I still enjoy doing half marathons, but not 37 of them!  So I'm going to concentrate more on doing 5K & 10Ks.  And as luck would have it, there are plenty of those to pick from.  Plus, as it turns out many of the 5Ks are basically fundraisers for some type of cause.  This really adds a nice dimension to do these races.


About this time, my mind shifted to where I was on this 18 hour journey so I switched over to the Amtrak tracker app and found we were 17 minutes from Trenton, NJ travelling at 107 MPH! 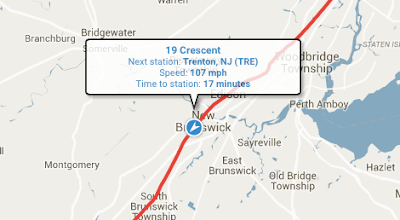 I was surprised, didn't think U.S. trains traveled that fast.  Okay back to finding some 5Ks.  It didn't take long before spotting a 5K near where I live coming up in a few weeks - the Fast Track 5k.  It just seemed to fit with being on a train going 107 MPH!

Proceeds from race support the Southeastern Railway Museum.  So being on a train (finding I prefer train travel over flying when I have the time) and finding this race just came together, it made sense to do this race.


It was a small race, think it had about 130 participants.  None the less, enjoyed it.