Besides recently deciding to do more 5Ks, I've also noticed that I am much more inclined to doing a 5K if I do not have to travel too far to get to it.  Heck the last 5K I did, was so close, didn't even have to drive to get there.  So when I noticed the Manna Fund Popcorn 5K was in my town, it was a slam dunk deciding to do it. 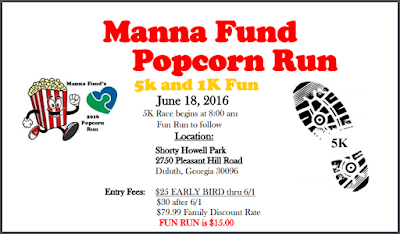 The proceeds from the race support the Manna Fund, I had no idea what that was.  So of course with the magic of Google and a few clicks, it's a 501c(3) non-profit organization dedicated to providing hope and financial assistance to individuals who need treatment for eating disorders.


Other than a pollen alert, it was in the low 70s with a 10-15 mph breeze at the beginning of the race.  This was really nice considering it has been in the 90s for about the last 10 days.  It felt good.


I estimated about a hundred participants in the race, give or take.  The race brochure indicated that medals would be given to the top three male and female finishers in five year increment age categories from 10 and under all the way up to 65 and over.  If it was an even distribution, age wise, of participants, that would be 72 medals.  So in a field of about a hundred, chances were pretty good that a lot of folks would go home with some hardware!


Just before the race started they brought us all in together to explain the course and the guy says "it's confusing but it really isn't".  It's never a good sign when they have to explain the course using the word confusing.   The normal trail at the park was 1.25 miles, so twice around would be .6 miles short of a 5K.  So at a certain point in the course there was a football field (with a track around it) and we needed to do two laps around that track but only on the first lap of the 1.25 mile course.   Being a really low key race, this was no big deal,  Plus it occupies your mind a little which is actually nice during a race.


We were off.  The park was opened for anyone  so there were quite a few others on the course doing their normal Saturday morning stroll/jog.  I'm sure they typically did not see a hundred or so extra people out on 'their' course on a quiet Saturday morning, but no one seemed to mind.


I ended up doing the course in 37:40 so I was happy with that, just over 12 minute miles.  It was a good workout.  And as mentioned earlier, with all of those medal categories, I place 2nd in my age group.  Although, there were only two of us in that age group!!!  :)