This year, instead of doing the Atlanta Half Marathon on Thanksgiving morning, decided to switch to this race, a 10K, closer to home. I'm enjoying the 10K distance for now. Maybe I'll just stay around that distance, not sure, we'll see. The other thing, kudos to the folks at Five Star, this race was only $21. And, it's that price regardless of the distance (5K, 10K, 15K, half marathon), $21. Can't beat that. Maybe in the future I'll consider the Atlanta Half again. But the $21 is hard to beat! 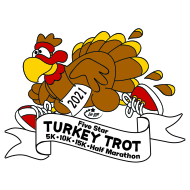 This was a road race through a few business parks in Johns Creek. Over 1200 people signed up for it. It was a 5K course: 5K-ers did it one time; 10K, two times; 15K, three times; half - four times plus a bit more to make 13.1 miles. Most participants did the 5K. This simply meant the first time through the course was crazy crowded. I enjoyed the second time through the course much more than the first - a lot less people.

For most of the race had the earbuds in listening to The Piano Guys - A Family Christmas. I suppose the season has officially started. It was a good race. Finished with a time of 1:15:57, once again, with so few in the category, placed 1st in the Male 65-69 group.

at November 27, 2021
Email ThisBlogThis!Share to TwitterShare to FacebookShare to Pinterest