Since the Callaway Half was on Sunday, we decided to head down on Saturday to visit FDR’s Little White House in Warms Springs, Georgia.  It was only a few miles away from Callaway.  Not only did we see the museum, watch a film, walk the grounds, we also got to go inside the Little White House.  I learned a lot from this visit.

After leaving there we drove through FDR State Park.  It’s about 9,000 acres with more than 40 miles of trails – must come back and hike this someday!

Callaway Gardens is about 13,000 acres and they have multiple places to stay – and they are not close to each other.  I was naïve about being able to find our place once we arrived on the grounds.  It took 10-15 (and that was with directions) miles to finally get to our place.  In checking in I had to sign this document acknowledging rate, check out day,…  pretty standard stuff.  However, I notice this little blurb at the bottom:  Fees if you are late checking out:  15 minutes late - $75.00, 30 minutes late - $100.00…  What!?  So I ask for a late checkout, hoping to come back to the room and shower after the half.  The guy tells me he can’t do that because he does not know their schedule in the morning.  Um, okay, how do I go about requesting a late checkout?  Told me "call in the morning and they’ll be able to tell me".  I told him, “I’ll be up really early, like 4:30 AM”.  He said "no problem, just give them a call".  Hmmm, okay.

Also, although their website advertised that you can get the "Fitness Series" room rate, it was exactly the same rate that anyone could get online.  Hmmm...

We were underwhelmed with the local dining options in Pine Mountain, so we just decided to have the pasta dinner on the grounds at Callaway.  I had received a one line email a few days earlier from them, it simply said:

Callaway Gardens will host a pasta dinner Saturday evening at the Mountain Creek Inn.  Pay at the door

Little did we know that we would enjoy this incredibly under-planned, no one seems to have a clue, what else could go wrong,… pasta dinner!  Honest, the comedy value of what we witnessed was great.  It almost like what a pasta bar might be if it was planned by the Three Stooges, George Costanza, and Kramer!   They could not do anything right.  I do not know if they just did not plan properly, if they did not schedule enough people, if they’ve never done this before,…  People were leaving left & right, they would have everything on the pasta bar except plates, someone would bring it to their attention, they’d smile and say, "they’re bringing plates out right now".  But they didn’t.  So folks who already had plates (prior servings) would come up to the line and get more pasta.  By the time the plates got put out, the pasta was gone for the people who were waiting for plates!  And it would be 15-20 minutes for more pasta to come out – and then something else, like sauce would be out.  This went on for an hour and a half!  We were beginning to think that this was for the TV show Punk’d or something like it.  Don’t get me wrong – the staff folks were great – polite, respectful – this was not their fault.  My wife and I both agreed watching this happen was funnier than anything we could have watched on the TV back in the room!

Morning of the Race

Woke up around 4:00 AM to a super clear sky and 33 degrees.  Made coffee in the room, ate my race day morning bagel and decided take advantage of the Pine Mountain (very little light pollution) clear sky.  The other day I posted about the Star Walk app – and I did have my iPad with me.  It was fantastic!  Located Mars and saw & identified all the stars in the Big Dipper.  Although at 33 degrees, did not stay outside too long doing this.  But it was a good clear sky.

So it’s about 5:00 AM by this point, so instead of calling down to the front desk about that late checkout, I just decided to walk over.  The woman at the front desk tells me, “oh I can’t do that for you, I’m from the night shift, you have to wait to 7:00 when the morning shift comes in”.   I told her that the guy at check-in said this would be no problem at 4:30 AM for you to do this.  So now I’m thinking, after the Three Stooges, George Costanza, and Kramer designed the Pasta Bar, they must have moved on to develop the "Avoid giving the customer a late checkout" procedure!

They had the start set up right next to this very large tent structure where we picked up our bib, ankle bracelet, shirt the day before.  It was warmer inside than the 33 degrees outside, so most folks made their way into the tent.  It was nice in there.  Some guy, probably the RD, started making some announcements inside the tent.  The one that got my attention – “Callaway does not allow portalets on the property”.  Their instructions went on to tells that we will be passing some buildings while going through  the 13,000 acres, and it is possible that they might have a bathroom in it.  They will not be marked .  So, pretty much we have to search around and/or look inside buildings to see if there might be a bathroom.  The absolute first thought that came into my head – after the Three Stooges, George Costanza, and Kramer designed the other two things mentioned earlier, they designed the porta-potty strategy for the races!!!

And we were off!  My guess, there were maybe 400-500 people doing the race.  So except for the very beginning, it was never crowded.   Oh yeah, I did find one of those bathrooms the guy mentioned, but when I got to the door, it had a note on it: 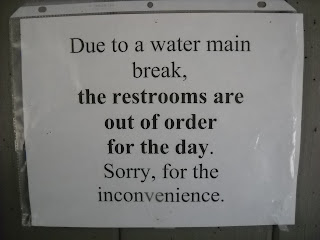 As far as the actual course, it was a magnificently beautiful!  For me, it had the perfect amount of rolling hills.  I am glad I had the opportunity to do this half marathon.

I was just looking at the medal we got after finishing the race.  I noticed that it was peeling a little bit, so I peeled it back a bit more.  These are recycled medals.  Wow – is it ever cheap!  I guess after the Three Stooges, George Costanza, and Kramer designed all of those other things, they worked on the race medals.  My medal had four round stick-on stickers on it:


Edit 2/7/2012:  For another perspective on this race, you can also read Drew's race report over on runningrecon.blogspot.com.