In connection to Veterans Day, one of the things they do at Soldier Marathon & Half Marathon is the Fallen Hero Program.   When you pick up your race bib you have the opportunity to do the race in honor of a service member who has paid the ultimate price, the giving of their life, in service to our country.

This year I did the Soldier Half Marathon in honor of Army Sgt. 1st Class Samuel C. Hairston. 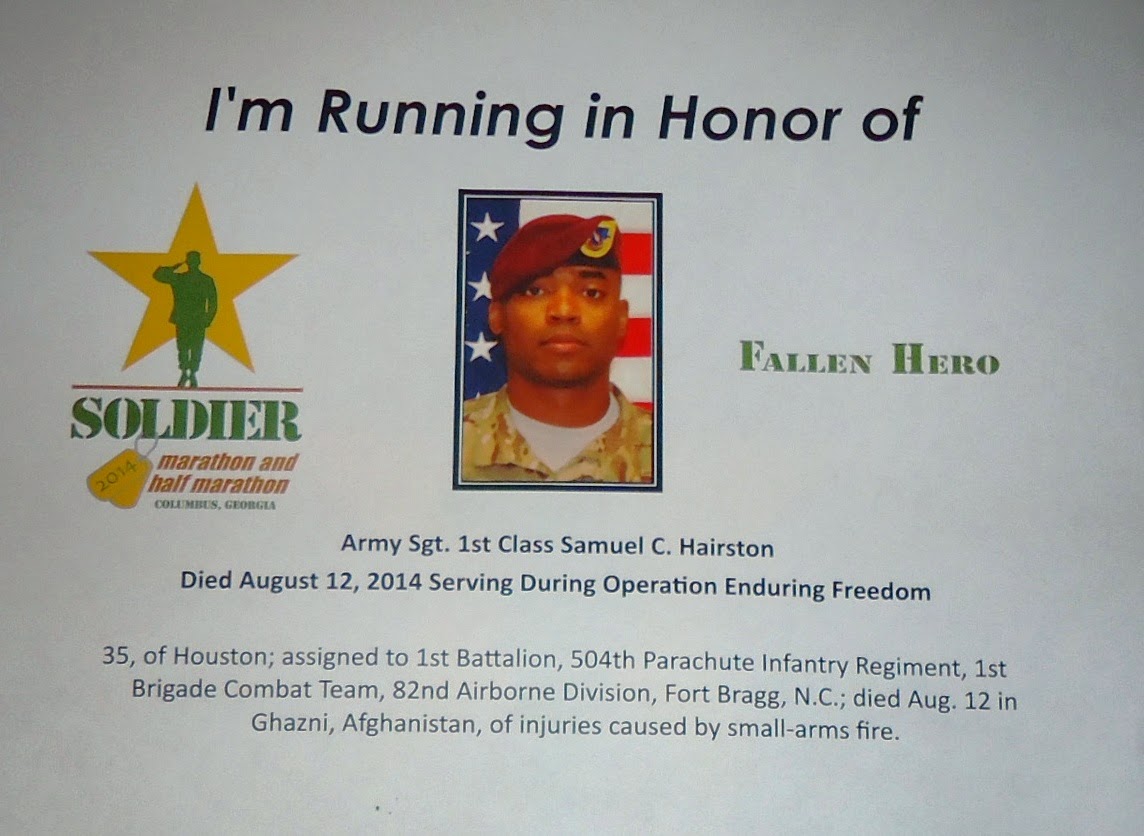 Besides being a decorated military veteran of 11 years, he also played NCAA Division I football for four years for the University of Houston where he earned a Bachelors Degree in Economics. 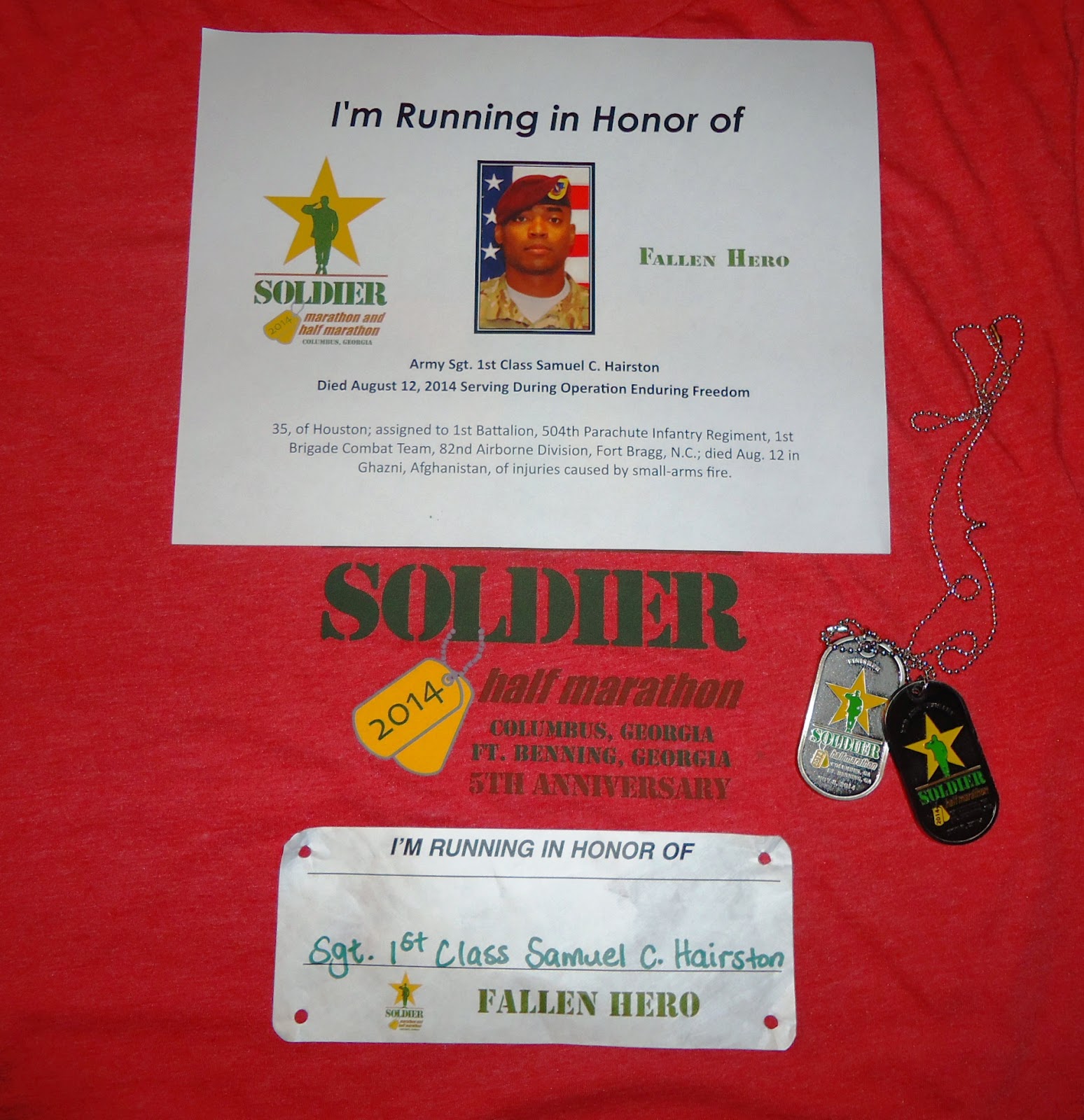 The day of the race started at 3:00 AM for me as I needed to be on the road before 4:00 AM for the 140 mile drive to Ft. Benning, GA.  I just could not justify the hotel expense since I'm typically awake by 4:00 AM anyway.  It was an easy, with not many others on roads, drive.  Arrived at the National Infantry Museum (where the race started/finished) for check in right around 6:30 just as the sun was rising.


Although the entire race course is not on Ft. Benning, 6-7 miles, is.  One can sense the pride, the precision, the honor while being on the Post.  I really enjoyed the section on Ft. Benning.


This first thing you see as you approach Ft. Benning, that really lets you know this race is really not like most others, is Patton's Park.  Named after WWII General George S. Patton.


Once on the post, you just know you are somewhere that is really different than the places you go in every day normal life.  Check out the signage:

Next, and I really appreciated this, the aid stations.  These soldiers were well trained in how to give water to the participants.  Now this might sound trivial, maybe even odd, but with the numbers of races I've done, it is amazing how many people want to give you water - holding the cup with their fingers in it.  Note how these soldiers do it: 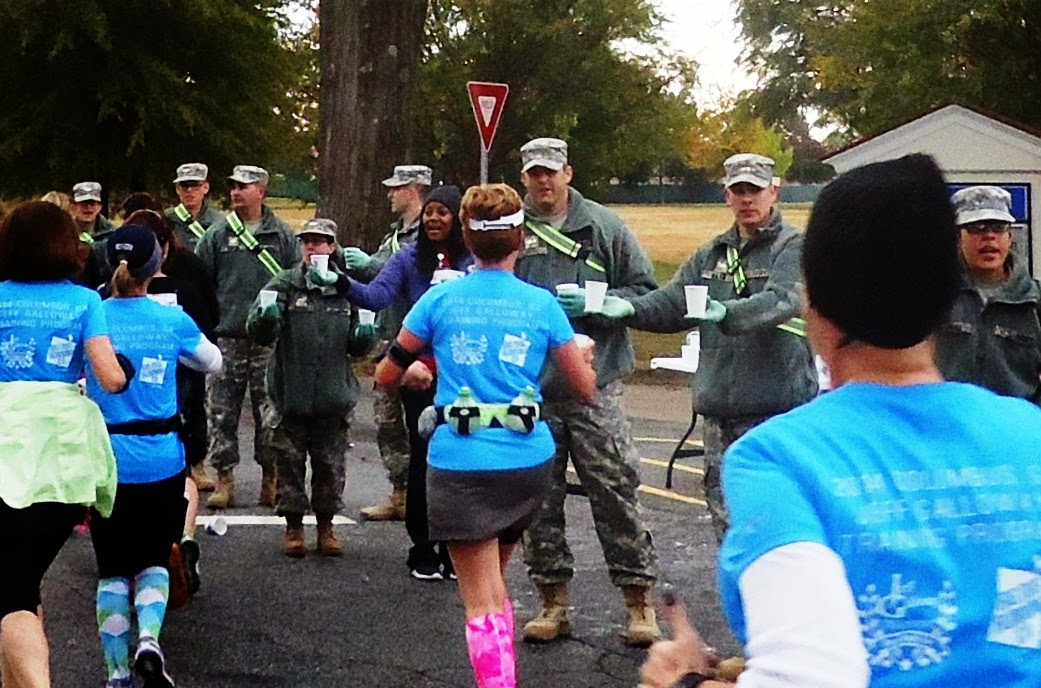 Thank you!  Not only am I overwhelmed in their commitment to serving us in the defending of our nation, but they also come out early on a cold Saturday morning to serve us during the race.  These people are great.


Okay, we've all seen it in movies or read about it in a book - Drill Instructors are known for chewing people's asses out.  It's what they do.  The Army had a little surprise for us at about mile 3.  We were "greeted" by some of Ft. Benning's Drill Instructors to provide a little motivation:

One of the Drill Instructors, in a deep, from the belly voice, barked out at me as I was attempting to take a picture  "you don't have time to take pictures, now move it!".  These guys were great!  But not something one typically sees during a half marathon/marathon!


Up the avenue a bit we saw living quarters for soldiers and their families.  Note the flags flying. 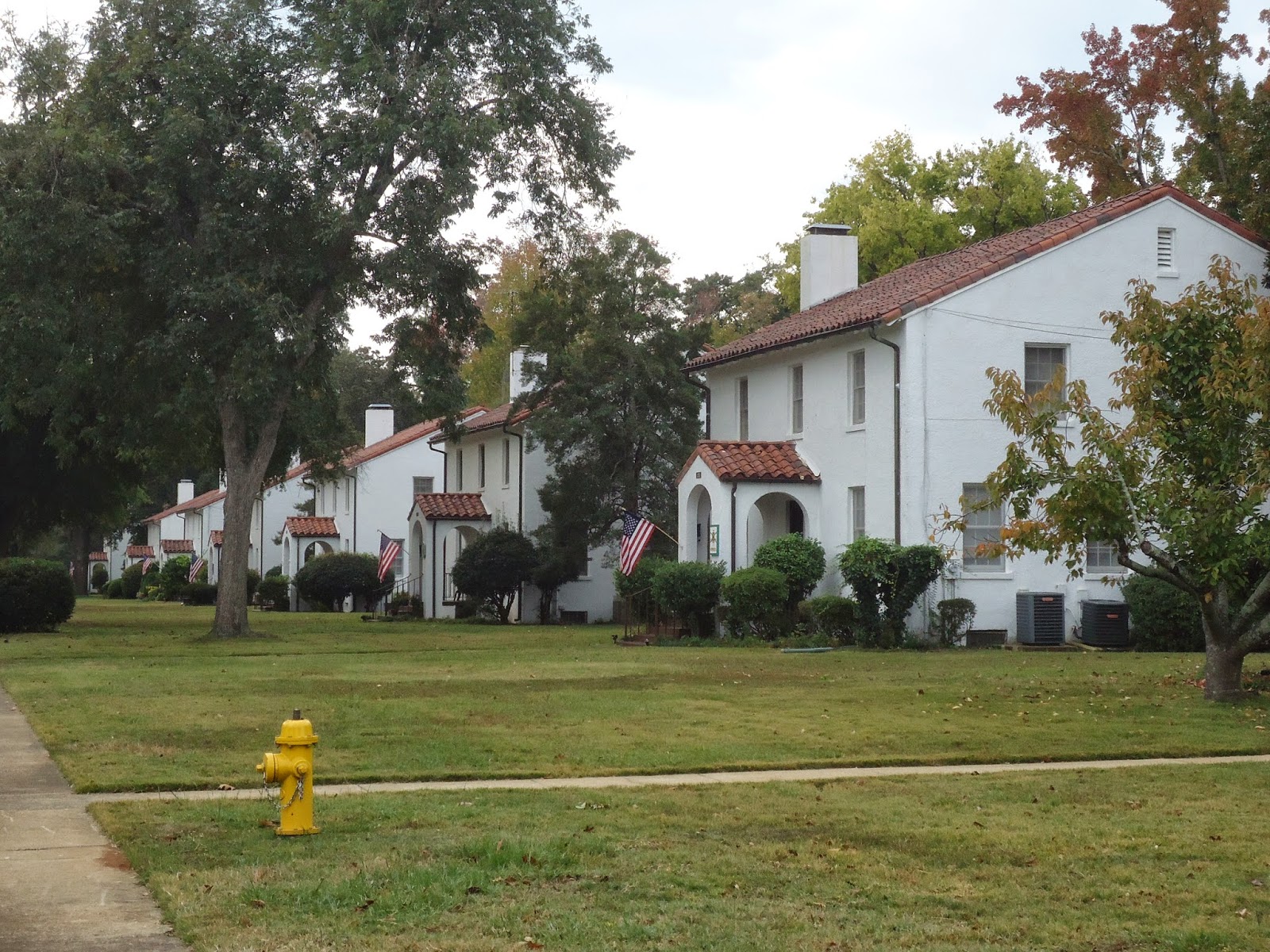 You could definitely detect order and pride just going around the post.  As we neared the exit, one sign in particular grabbed my attention:

This is a serious business, people agree to go into harm's way, for us and our country.  And for this I am very appreciative and thankful!

The rest of the half marathon was anti-climatic for me.  Sure it was nice, mainly on the Chattahoochee Riverwalk in Columbus, GA, but I would have preferred more on Ft. Benning.  Relative to where we had been, there was really not much to see, take pictures of, or write about.


Definitely recommend this race to anyone who likes the marathon or half marathon distance.


The 140 mile ride home wasn't too bad either.  Especially since I was able to listen to the Georgia Bulldogs have their way against the University of Kentucky Wildcats.  Georgia won 63-31.