Windy.  W I N D Y and cold, hovered around 40 degrees for the entire race with winds 10-20 MPH maybe more at times. 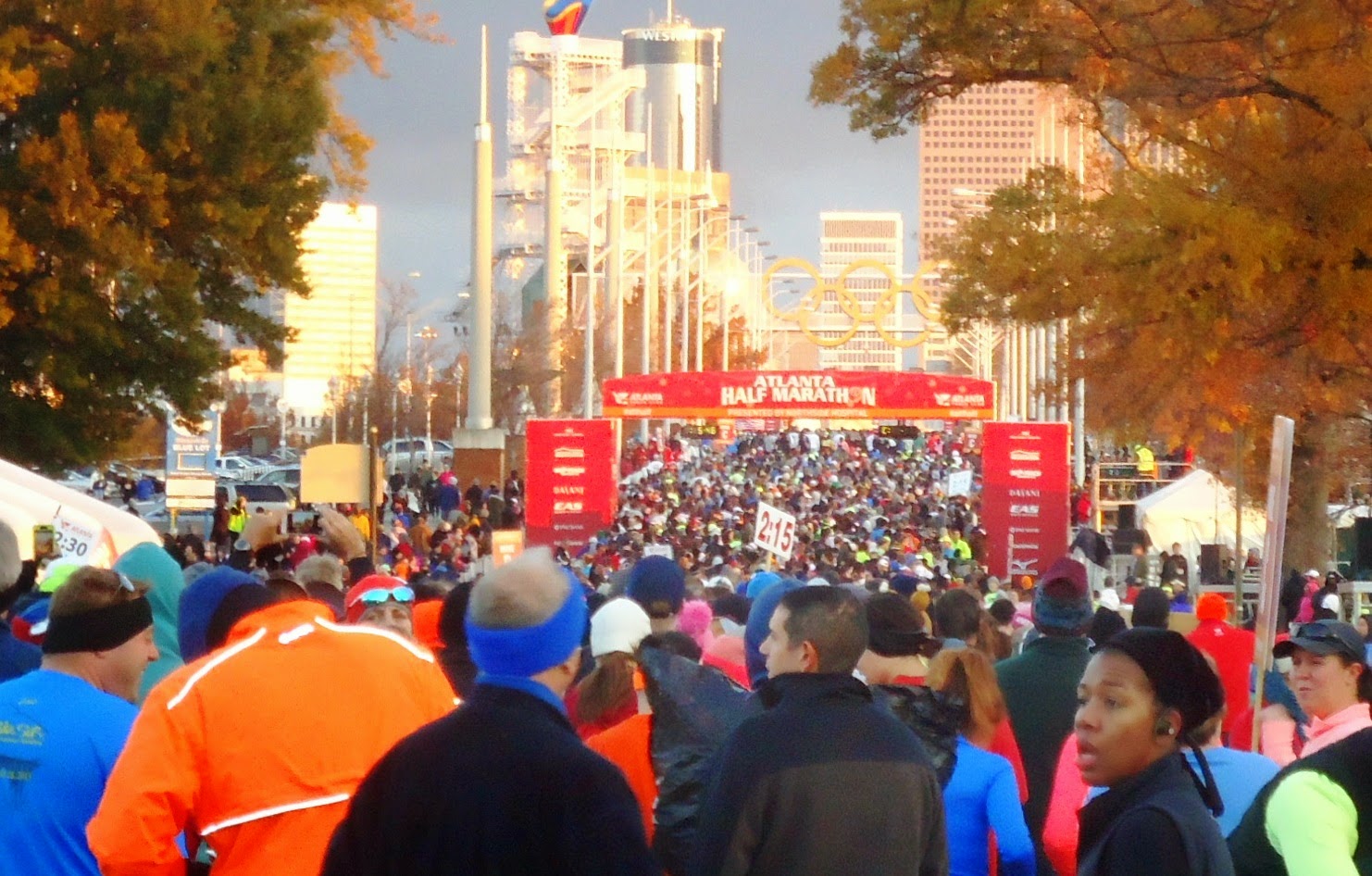 Did the 2014 Atlanta Half Marathon Thanksgiving morning.  What was so very special about this race, my new daughter-in-law, Raney, did it with me and it was her first half marathon!


Up crazy early that morning as I volunteered to help out with crowd control which meant arriving 5:15ish in the Green Lot at Turner Field (Atlanta Brave stadium).  I was a coraller (actually not sure if that is a word) for Wave "E".  With so many doing the race, think just under 8,000 signed up, they needed folks to "coral" them into groups/waves as they would start corrals one at a time.


The best part about getting there at that time - no traffic and plenty of parking spaces.  The other nice things about helping out, they gave volunteers a full-length zipper fleece (thanks Atlanta Track Club!) and, this was the best part, they had Krispy Kreme donuts & coffee!  Yes, I indulged.


I am always amazed at all of these folks who volunteer to help out with the race.  They needed and got 1500 people to volunteer for this race.  My volunteer job was one of the few that you could help out and do the race so it was no big deal for me to get there a bit earlier.  But I am very appreciative of all the others who were willing to come out on this cold, windy morning and help out.

Because I was also doing the race, the team leader assigned me to the front of the corral to be a rope holder.  Yes we actually controlled, corralled, people with ropes.  Although the race actually started at 7:30 with Corral "A", we in Corral "E" were slated for a 7:50 start.  So we made our way behind Corral "D" keeping our distance. 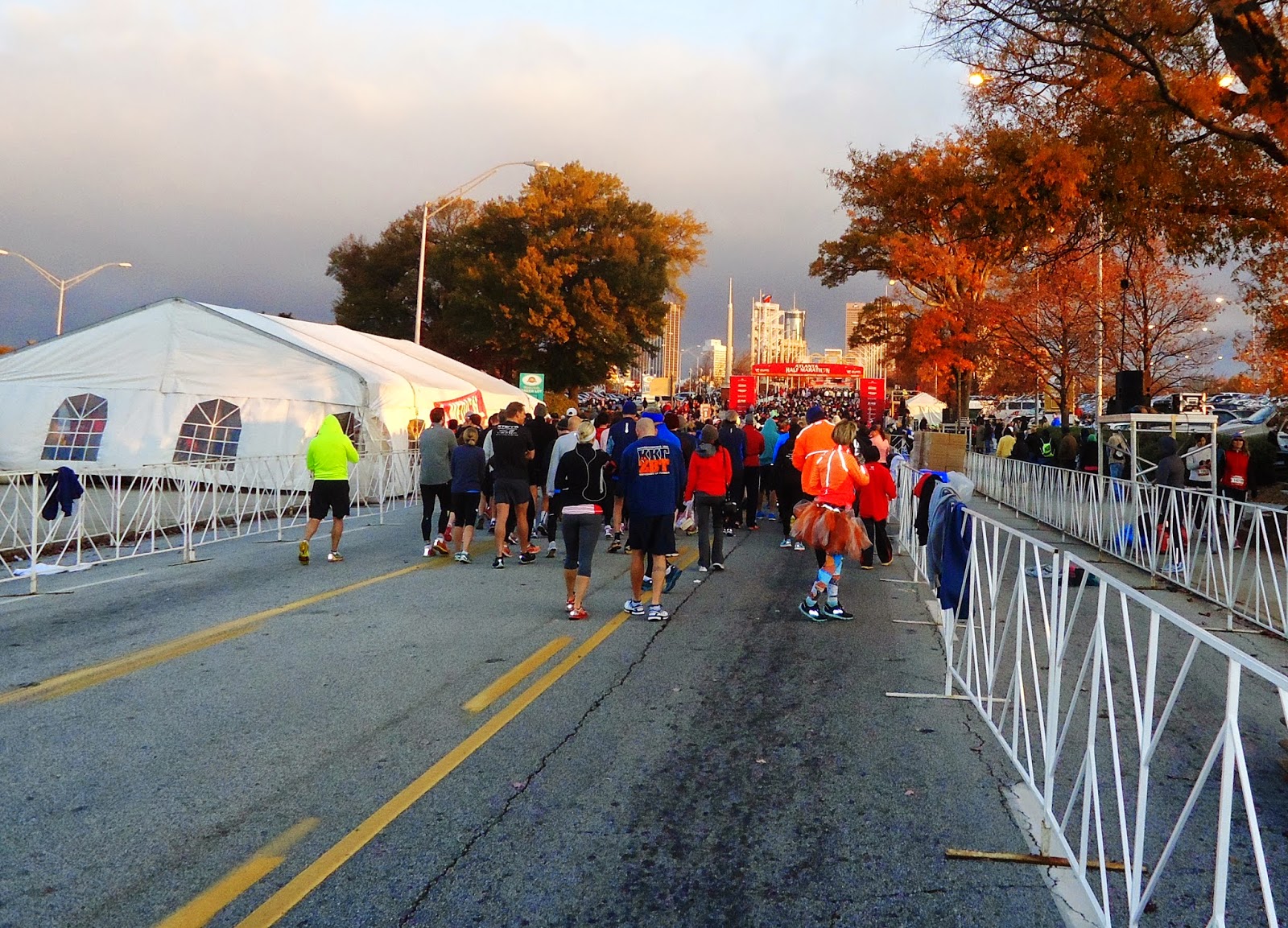 So at 7:50 we were off.  It was great to get moving to generate body heat.  From the starting line for about a mile or so, top layer clothes were thrown over the fences.  One of the things that this race did not have was gear check.  It is not uncommon for races to have gear check so the participants can "check" their top layer and such (for trying to stay warm before the start of the race) and then retrieve it after the race.  Instead this year the Atlanta Track Club was holding a clothing drive so people could discard their additional clothing and the ATC would collect, wash and donate to local shelters.  I liked this idea.


After standing around in the cold for 2+ hours it really did feel good to get moving.  It wasn't too long into mile 1 when I felt a tap on my shoulder.  It was Raney and that was the last I saw of her for the race.


This was my 5th year in a row doing this race since they changed the course.  I do enjoy the course, it's a great way to actually see the City of Atlanta. 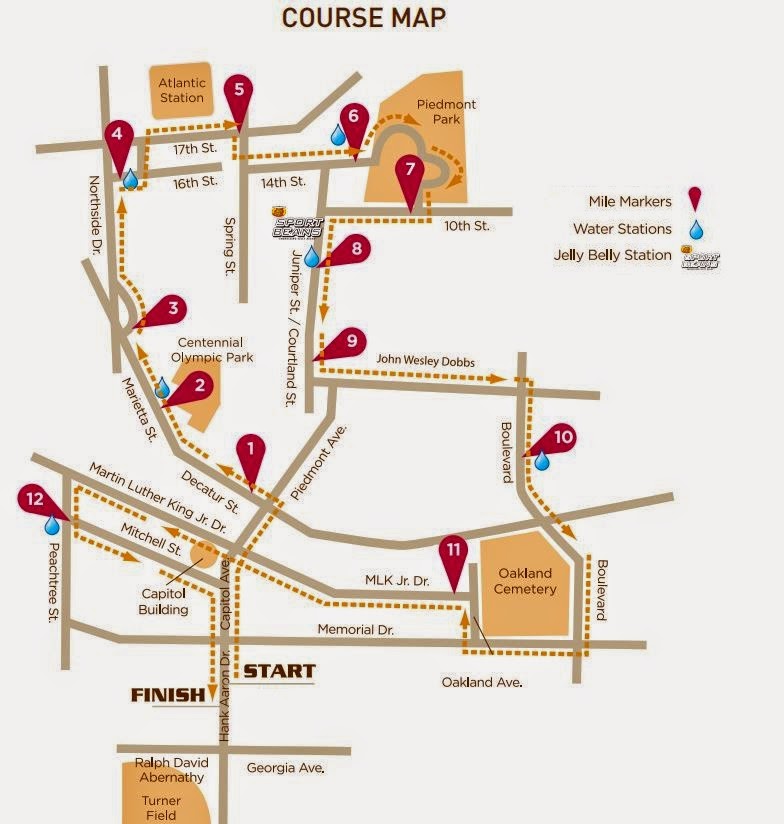 As usual with a half marathon, at least for me, miles 1-8 are not so bad, even in cold windy weather.  But once I hit mile 8, mile 9, my attitude about doing the race really changes and not for the good.  It is no longer fun.  It is no longer enjoyable.  It hurts.  I want to stop moving.  I just want it to be over.  Of course the best thing to think about in a race, when it really starts to hurt, especially on Thanksgiving morning is: mash potatoes & gravy, turkey, stuffing, pie,...  Oh I thought about these a lot during those last 4 miles.  That was my real prize and I couldn't wait to get it!

Really?  I guess I'm in the Senior Zone now?  Gee, I wonder if others could see the sign  :)


I was really happy to cross over that finish line, really happy.  Each received a finisher's medal, a top layer (to help keep warm during cool down), water, Powerade, and a box of goodies to eat.  Shortly thereafter Dan & Raney found me.  I was anxious to hear from Raney.  She did great.  She completed her first half marathon!

at November 28, 2014
Email ThisBlogThis!Share to TwitterShare to FacebookShare to Pinterest
Labels: half marathon