Crazy amount of steps on the fitbit for this day...

My daughter and I had a great time doing the 2016 Great Saunter, a 32 mile walk around the rim of Manhattan.


Years ago a guy named Cy Adler wondered if it was even possible to walk around the rim of Manhattan in a day, so he and some of his friends tried and did it.  I guess they enjoyed it so much, they started doing it every year.  As the years passed more and more people became interested and decided to join in what they ended up naming "The Great Saunter".  On Saturday May 7, it was the 31st annual Great Saunter and ~1500 people signed up to do it.


Being a walker I stumbled across the Great Saunter a few years back and it quickly became a "bucket list" thing.  Little did I know it would end being a repeating bucket list thing  :)


Since I’d already written two chronological blogposts and created a video on the previous Great Saunters I did, I thought I’d play back the 32 miles and come up with a list of 10 things that stood out to me about the experience of doing it.


1.  What an absolute, wonderful, great, great, great time I had with my daughter.  My daughter is a mother of three rambunctious boys and she and her husband live in New Hampshire - so I do not get to see her much.  The Great Saunter took us about 10 and half hours, time that we could talk, reminisce, walk, be silent, laugh, be sad, and just simply share time and an experience together.  I do not think I have had 10 alone hours with her since she was in middle school!  So very special this was!


2.  Although I worked in NYC at the beginning of my career and I have visited the city many many times over the last few decades, the sights you see during a 32 mile walk around New York City cannot be matched by seeing the city any other way.   To me, the Great Saunter is not about walking 32 miles in a day, it is much more about seeing NYC in a very unique way.


3.  The Great Saunter, although it is six miles longer than a marathon, is nothing like a marathon.  Having done a few marathons, my daughter asked me which was harder.  First off they are both hard.  Anytime you get your legs to take that many steps, regardless of running, jogging, walking fast, walking slow, it is hard.  Our bodies are not used to doing that many repetitions, of anything.  So when you do, your body will let you know, at times it will let you know by “screaming” at you.     Second, one of the things we did during the saunter that would never happen during a marathon - stop for a coffee.  At mile four there was a coffee shop and we both had the same idea :)  So we stopped and went into  and ordered two large lattes.  Now we didn’t sit down in the coffee shop to drink our coffees, we got back out onto the Great Saunter “course” and continued on.  Third, we stopped for lunch at about mile 16 - which included a bathroom break, sitting on a park bench in Inwood Park, a change of socks, and some socializing with other saunterers.  You see, there is no clock in the Great Saunter whereas in a marathon, you are constantly looking at your time and pace.  I did tell Jen that this was so much more fun than a marathon though!


4.  A funny thing happened at about mile 17 or 18.  One of the things that you pick up on real quick during the Great Saunter is the other saunterers  (most) have their “race” bib attached to the back of their backpack.  This actually becomes a comforting sight as there are times in the 32 miles that you wonder if you you are still on the right path.  There are times when you are clumped together with many others and there are times when you do not see any other Great Saunterer.  So anyway, we were starting our way down the Eastside, near the Harlem River and all of a sudden  we start seeing Great Saunterers passing us going in the other direction!   There were two groups and after the first group passed us, the thoughts of something is wrong here.  Then a minute later another group passes going the other way too.  We are starting to think something is really wrong.  But there really is a Great Saunterer code where you help each other out because we are all in this together and we would sort of expect them to inform us of any upcoming issues.   Well as it turned out, they had opted to do the Great Saunter backwards!  Instead of going up the Westside and down the Eastside, they decided to do just the opposite  :)  I guess if a person has already done the Great Saunter one way it would be fun to see Manhattan from the other direction.  Who knows, maybe we will try that some day.


5.  A really nice thing happened during our “lunch break” in Inwood Park.  It was roughly the half way point, ~16 miles and the Shorewalkers volunteers were set up giving out free gatorade and many different kinds of potato chips (much appreciated).  They also were handing out Mole Skin to any who needed it.  But besides that they were also selling Great Saunter T-shirts.  While picking up some chips & Gatorade, I started to think it would be nice for us to get a T-shirt.  But for whatever reason, I did not.  So we sat down on one of the park benches, changed into a clean pair of socks, drank, and ate.  Just before leaving, decided to go back to the table and get two t-shirts.  Just as I got back to the tables, the volunteers were informing all that one of the Great Saunterers made a very generous donation and basically paid for the rest of the t-shirts so they were free at that point.  Jen and I got t-shirts!  That was a very nice thing.


6.  There really is no good reason, at least in my mind, to walk 32 miles.  Well unless it is the Great Saunter!


7.  Give me a dollar…  This was funny - we were on the Eastside crossing over one of the pedestrian bridges and it was a bit on the seedy side.  There were a lot of empty wine & whiskey bottles and such.  But the one thing that really caught our attention was a piece of cardboard, maybe about 18 or 20 inches square with some writing on that read “Give me a dollar or I'll vote for Trump”!  Suspect it was a panhandlers sign with a new approach to getting a few bucks.  We heard the guy behind us say “I’ll give him two bucks to vote for Hillary”!


8.  Bathrooms and NIML.   To walk 32 miles and stay hydrated along the way means, yep, you guessed it.  Well it really was not as big of a problem as I thought it would be as there are many bathrooms along the way.  It was during my first Great Saunter where I met  another saunterer and he told me two things that I will not forget.  First, whenever you see kids playing sports in any city park (and there were many) there will always be a bathroom.  So it was never really a big issue in finding one.  One suggestion though and this is especially true with ~1500 saunterers on the same path - toilet paper.  You might want to have some in you pack.  The other thing that he taught me - NIML.  Not in my lifetime.  I walked with him on previous Great Saunters (I ran into him on the first two that I did and was hoping to see him again on this one) and as we talked about things he said “NIML”  I said “What?”  He was retired and a few years back he came to the realization that a lot of things he worried about in the world would not, could not, be resolved in his lifetime - so he began to categorize certain things as NIML which relieved him from having to worry about them.  Since that time I have come to see the wisdom of NIML.


9.  Shorakkopoch -   Okay, most have heard the story at some point or other or at least some variation of it.  In 1626 the island of Manhattan was purchased from Native Americans for trinkets and beads worth about 60 guilders.  Guilders are a Dutch currency, currently one Dutch Guilder is worth about 52 cents!  So do the math and see what the purchase price was for Manhattan.  Anyway in Inwood Park, just before lunch, we came across the Shorakkopoch Rock  .   What an interesting tidbit of history to come across.


10.  Fraunces Tavern   -  Prior to hurricane Sandee, the Great Saunter started and ended at Heartland Brewery in South Street Seaport.  However, Sandee destroyed a lot of the area including the tavern where it use to start & end.  So now the Great Saunter begins and ends at Fraunces Tavern.  There is some significant history at Fraunces Tavern, the biggest thing, this is where George Washington bade his troops farewell and thanked them after war!  My sister and brother-in-law, Laura & Ted were once again very gracious to us, not only did they drive us into the city for the start of the saunter, they were there also at the end to pick us up, including dinner reservations! 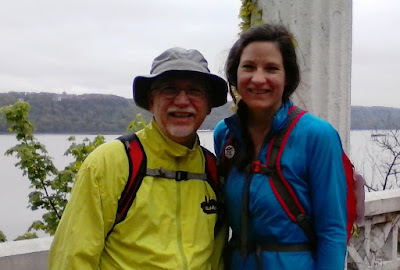 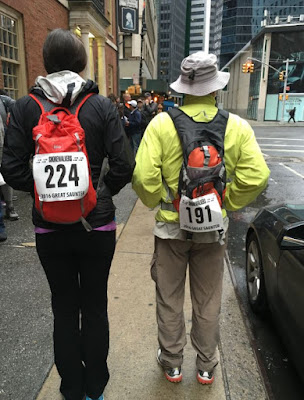